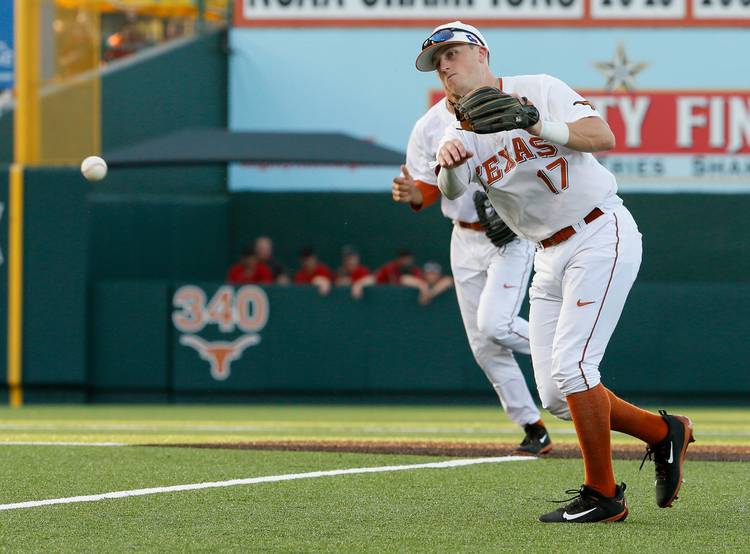 Bret Boswell (#17) fields a grounder for the final out of the ninth inning as the Texas Tech University played the University of Texas at UFCU Disch-Falk Field in Austin, Texas on March 18, 2017 (Andy Nietupski for AMERICAN STATESMAN)

Once a shortstop, Texas redshirt junior Bret Boswell was moved to second base for the 2017 season. It may have been a golden opportunity for the infielder.

Boswell has been named a finalist for the ABCA/Rawlings Gold Glove Award that will be given to the nation’s top second baseman. Playing on one of the country’s best defenses — among the 295 NCAA Division I teams, Texas ranks fourth in fielding percentage and fourth in double plays — Boswell is UT’s only finalist for a Gold Glove.

At second base, he is a finalist alongside Oregon State sophomore Nick Madrigal and SIUE senior Alek Skender.

Boswell boasted a fielding percentage of .993 this year, and he was responsible for only two errors. Boswell committed one of those errors on his first fielding opportunity of the season, but he went 235 attempts without another miscue.

Boswell also had a hand in 47 of Texas’ 65 double plays this season.

A Rockwall native, Bowell hit .273 with seven home runs and 33 RBIs in 2017. Last week, he was selected by Colorado in the eighth round of the MLB Draft. He has reportedly signed with the Rockies.