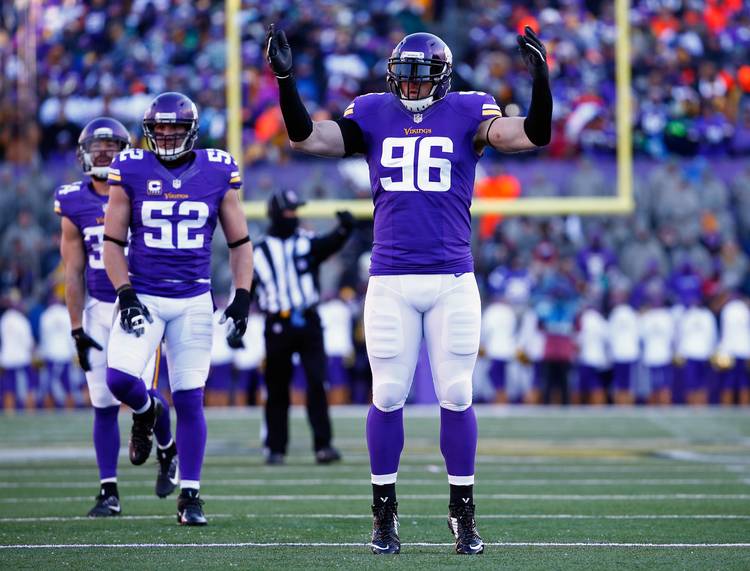 Brian Robison and the Minnesota Vikings are one win away from the Super Bowl. (Photo by Jamie Squire/Getty Images)

Replays of the Minneapolis Miracle showed longtime Vikings defensive end Brian Robison running down the sideline, arms aloft, as Stefon Diggs loped into the end zone to eliminate the New Orleans Saints from the postseason.

Photos from the aftermath revealed an emotional Robison on his hands and knees, his head pressed against the white paint of the sideline as the celebration ensued. Of all the Texas exes currently on NFL rosters, only two have been in the league longer than the 34-year-old Robison: Arizona kicker Phil Dawson (19 seasons) and Kansas City linebacker Derrick Johnson (13).

Robison was one of several heroes in Texas’ 2005 national title win over USC. He was the first player to tackle running back LenDale White on that fourth-down stop that set up Vince Young’s game-winning drive.

He was also one of three players remaining from the 2009 Vikings team that lost to the Saints in the NFC Championship, which later became known as the Bountygate game where Saints players were out to knock then-Vikings quarterback Brett Favre out of the game for bonus money.

“I’ve been part of this organization for 11 years,” Robison told the Twin Cities Pioneer Press. “You don’t know if you’re ever going to have this opportunity again. They’re few and far between. Sometimes guys who have played 15-plus years in this league and never get these opportunities.”

Minnesota has opened as a 3.5 point favorite in the conference title game at Philadelphia. Robison understands a team is only as good as its last win. The Vikes have a good chance to become the first team in league history to play a Super Bowl in its home stadium.

“It’s huge for this franchise, huge for our fan base,” Robison told the Pioneer Press. “But if we don’t go win next week it’s all for nothing.”

How bad would things be at Texas had TCU not blown that layup at the buzzer? The Horns, at 11-6, are in solid position to make a run at a tournament berth but the team is fast becoming known as a team lacking killer instinct. That Duke game was a precursor to what the season has become. Texas had the Blue Devils down 16 in the second half but couldn’t close. They led for most of the game at Baylor. Couldn’t close.

The latest was Saturday’s implosion at Oklahoma State, where the Horns led by in the final seven minutes of a one-point loss.

Shaka Smart will kick himself if the hard-luck Horns end up on one of those first-out bubble lists come tourney time because of all those late blown leads.

For the rest of Cedric’s Nuggets, including his thoughts on the NFL playoffs one of the league’s horrible rules, click here.

Preview: Texas vs. No. 8 Texas Tech

Ahead of season’s first pitch, Texas appears in another preseason poll