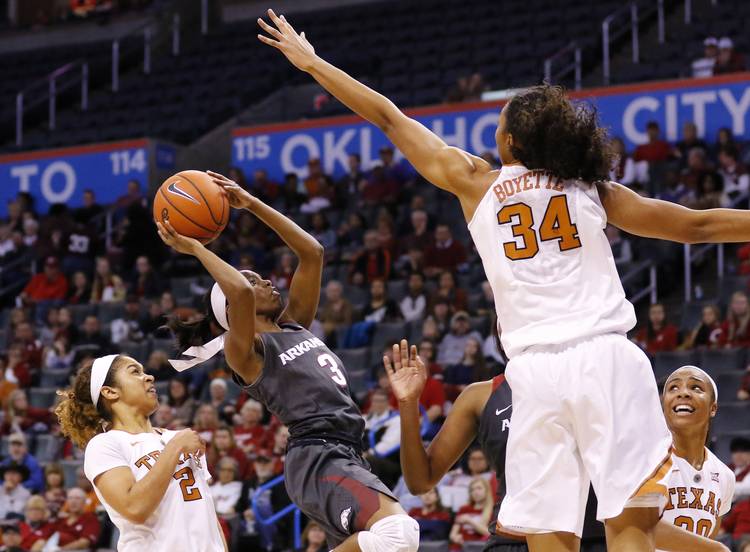 OKLAHOMA CITY (AP) When a potential blowout turned into a nail-biter, Brianna Taylor stepped up for No. 5 Texas.

After watching an early 17-point lead shrink to three in the fourth quarter, Taylor scored four of her 15 points in the final minute to lead Texas to a 61-50 victory over Arkansas on Sunday in the Big 12-Southeastern Conference Challenge.

“You can’t complain too much about not having a loss at this point with our team,” Texas coach Karen Aston said. “But there are areas that we will look at and obviously will need to improve before league play.”

Jessica Jackson led Arkansas (3-8) with 22 points, and Devin Cosper added 13. The Razorbacks reached the second round of the NCAA Tournament last season, but have lost eight of their last nine games.

It was the first meeting between the former Southwest Conference rivals since 2003, when they faced each other in the NCAA Tournament.

Texas’ leading scorer, Imani Boyette, played only 21 minutes due to foul trouble, but was a force defensively. She blocked six shots and had seven rebounds and six points.

Boyette scored her final four points on baskets during the first two minutes of the fourth quarter, helping Texas build a 49-40 lead. Texas still led 53-44 with 5:02 left, but the Longhorns didn’t score again for more than four minutes and Boyette fouled out on a charging call with 1:47 left.

Jackson made two free throws with 1:18 left to pull Arkansas to 53-50. Taylor’s put-back she had a season-high nine rebounds, six of those offensive with 51.4 seconds extended the Longhorns’ lead to five points. She followed with two free throws two seconds later. After a charging foul on Arkansas’ Jordan Danberry, McCarty hit two free throws to seal the win.

“Brianna Taylor’s contribution to this game was huge,” Aston said. “She had to spend most of the time guarding Jessica, which was difficult, and then at the other end, she gave us some huge offensive rebounds and some extra possessions which really were the difference in the game.”

Texas jumped to a 20-3 lead after one quarter as the Razorbacks hit only one of their first 18 shots six of those were blocked by the Longhorns and committed nine turnovers. It was Arkansas’ lowest-scoring quarter of the season.

Arkansas rallied in the second quarter, taking advantage of a nearly eight-minute scoreless streak by the Longhorns, and closed to 25-19 by halftime thanks to three 3-pointers by Cosper, the last in the final seconds. Texas led despite 13 first-half turnovers.

Arkansas: The Razorbacks will begin SEC play with games against four ranked foes at South Carolina on Jan. 3, Texas A&M on Jan. 7, at Mississippi State on Jan. 10 and Tennessee on Jan. 14 … Jackson, the Razorbacks’ leading scorer, started for the first time since Dec. 2 against Missouri State. She missed a loss to Rutgers and came off the bench in the past two games.

Texas: Boyette’s six blocks gave her 223 for her career, moving her into fourth place on the Texas list, past Angela Jackson, who had 221 from 1994-1998 … Texas moved into fifth place in NCAA Division I with the program’s 991st win. Only four programs have reached 1,000 wins Tennessee, Louisiana Tech, James Madison and Old Dominion.

Since Arkansas left the Southwest Conference for the SEC for the 1991-92 season, the Razorbacks have played Texas only once, with the Longhorns winning an NCAA Tournament game in 2003. Texas leads the series 22-3, but Dykes was glad to face one of his alma mater’s longtime rivals.

“I talked to our young ladies about the history of the Southwest Conference and how for so many years, Arkansas was the only school not from the state of Texas and how much this game means to, especially, our older fan base,” Dykes said. “I knew we were going to fight. I knew we weren’t going to panic and give in.”