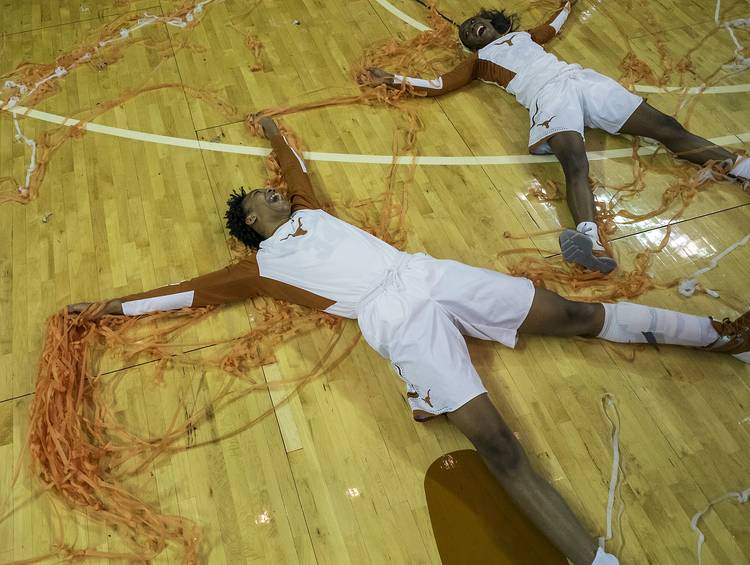 January 27, 2016 - Texas (34) Imani Boyette, left, and (22) Tasia Foman, right, make angels on the floor with streamers and confetti as they celebrate the program's 1000th win after defeating Kansas 74-46 at the Erwin Center in Austin, Texas, on Wednesday, Jan. 27, 2015. Texas women's program is the 5th team to reach the 1000 milestone. RODOLFO GONZALEZ / AUSTIN AMERICAN-STATESMAN

Senior post Imani Boyette has been selected as a recipient of the Haier Achievement Award, presented to student-athletes for their accomplishments beyond their sports. Boyette will be recognized during the Texas-Baylor men’s game on Feb. 20 at the Erwin Center. Haier will donate $2,000 to the university’s general scholarship fund and a 48-inch high-definition television to the athletic department. … Texas has won three straight games since losing to Baylor on Jan. 17. … Sophomore guard Brooke McCarty leads Texas with 38 three-point baskets and has hit at least one three-pointer in 15 of UT’s 20 games this season. … Texas beat Kansas 70-46 Wednesday for UT’s 1,000th victory all-time. Only five NCAA Division I women’s programs have reached the milestone.

After an 0-4 start in conference play, the Wildcats have won four in a row. That includes a 65-53 victory over Texas Tech on Sunday in Lubbock. Wildcats guard Megan Deines had 20 points in the victory over Tech. … KSU defeated Texas 66-57 last season in Manhattan as junior guard Kendred Wesemann scored 25 points, hitting 8 of 11 shots from behind the three-point line. Wesemann ranks 29th in the country in three-point accuracy, connecting on 42.6 percent of her shots from behind the arc. She’s also 19th in the nation in free-throw percentage at .882. … The Wildcats reached the second round of the NCAA tournament last year before losing to Missouri 67-48.