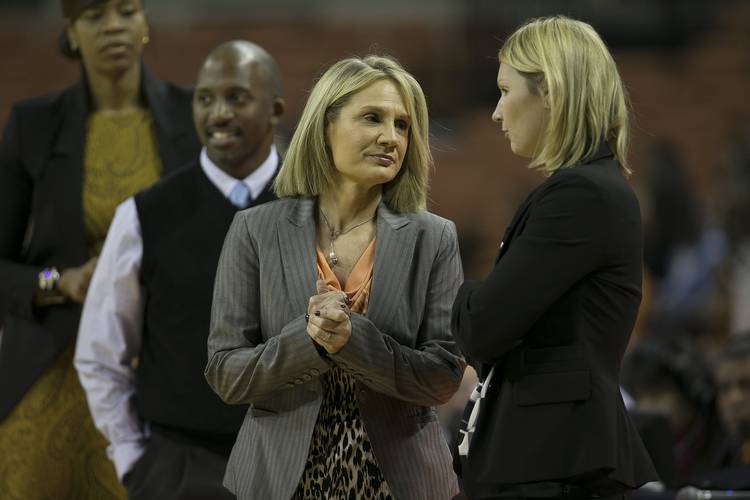 STANFORD, Calif. (AP) — Even in November, Tara VanDerveer prepares her team for March by scheduling tough games and treating them like NCAA Tournament matchups.

Brittany McPhee scored a career-high 28 points, Erica McCall added 17 points and six blocked shots, and No. 11 Stanford avenged a home loss against Texas from two years ago by beating the eighth-ranked Longhorns 71-59 on Monday night.

McPhee shot 11 for 15 and had seven rebounds, while McCall had five boards and blocked five of her shots in the first half as Stanford (2-0) shot 54.9 percent to overcome 20 turnovers and spoil Texas‘ season opener.

“Our team really focused. This was like an NCAA Tournament week. It was awesome,” VanDerveer said. “I’m really proud of how people worked and I’m really excited for the good things that we did and we’ll go right back to work and get ready for Gonzaga and clean up some of those rebounds, some of those turnovers.”

VanDerveer, the Hall of Fame coach beginning her 31st season at the school and 38th as a college coach, moved 18 victories away from joining the late Pat Summitt as the only women’s coaches to reach 1,000 career wins.

After the Longhorns cut Stanford‘s lead to 52-47 on Joyner Holmes’ lay-in with 3:10 left in the third quarter, McCall quickly answered on the other end and Alanna Smith scored the next time down as the Cardinal capitalized on Ariel Atkins’ turnover.

Smith, a sophomore from Australia, had her family in the stands visiting. Her father, Darren, was asked during one timeout what insight he had for the team — and his response was a good one.

“Get Brittany McPhee the ball,” he said, smiling.

Brooke McCarty, the leading returning scorer for Texas after she averaged 11.8 points last season, had 20 points and Atkins had 14.

“It was an eye opener today,” McCarty said. “We kind of have to take that and roll with it. We just got outplayed and we got beat.”

A junior guard with 11 career starts over her first two college seasons, McPhee is taking on a bigger role for VanDerveer’s young team. And Texas, which beat Stanford the past two seasons, didn’t have an answer for her accuracy.

The Longhorns ended the Cardinal’s 28-game home winning streak with an 87-81 overtime win at Maples Pavilion on Nov. 20, 2014, when Stanford was ranked sixth and Texas No. 10 — the program’s first win over a top-10 team in almost six years. It marked the first meeting when both teams were in the top-10.

That year, Stanford couldn’t make it two in a row after beating No. 1 Connecticut 88-86 in overtime three nights earlier to snap the Huskies’ 47-game winning streak.

Stanford was too much this time.

“When you get beat sometimes all you do is talk about what your team wasn’t good at but I would say that midway through the second quarter they really broke our defense down,” Texas coach Karen Aston said. “We’re young and a little bit immature and I thought that we started panicking a little bit. We missed some free throws and our confidence got rattled a little bit at the end of the first half and we weren’t able to recover from that.”

Texas: The Longhorns held a 38-32 rebounding edge but were just 6 for 14 at the free throw line. They lost a season opener for the first time under fifth-year coach Aston (4-1). … Aston coached her 300th career game. She is now 190-110 starting her 10th season as a college coach and 89-47 in her fifth season leading the Longhorns. … Texas started the season on the road for only the second time in the past 13 years.

Stanford: McCall was one off her career high in blocks. She had three blocks in a season-opening win against Cal Poly on Friday and now has nine through two games. “I love blocked shots,” she said. … The Cardinal are 15-4 at home against top-10 teams over the last 10-plus seasons and 139-7 at Maples since 2007-08.

Texas: The Longhorns host Houston Baptist on Wednesday morning in their home opener, an 11 a.m. local time tipoff for the program’s annual 40 Acres Field Trip game for middle-school students from around Texas and a day that includes educational activities.

Stanford: The Cardinal have another tough opponent Friday at home against West Coast Conference power Gonzaga, winner of 11 of the last 12 WCC regular-season titles and picked to do so again.

At The Buzzer: Texas 80, Louisiana-Monroe 59