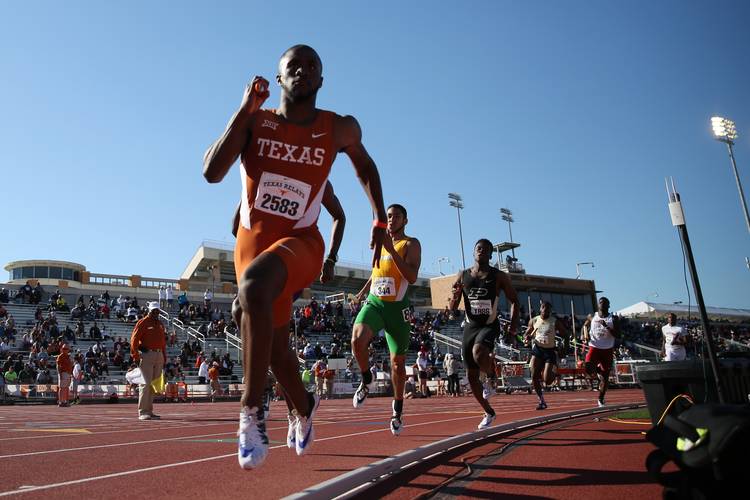 University of Texas junior Byron Robinson runs in the 4x400 meter relay at the Texas Relays on April 2, 2016. Robinson qualified for the 2016 Olympics on Sunday Shelby Tauber for the Austin American-Statesman

Robinson was the only collegiate athlete in the field and placed second behind 2008 silver medalist Kerron Clement. Clement won in 48.50 seconds and Robinson was right behind at 48.79. Clement will be joining his third Olympic team. Michael Tinsley, a Round Rock resident who won silver in the 400-meter hurdles at the 2012 London Olympics, was third in 48.82.

Spencer made her first Olympic team by crossing the finish in 54.02 seconds. Dalilah Muhammad ran the fastest time in the world this year, 52.88 seconds, and took first. 16-year-old Sydney McLaughlin made the team with a third place finish (54.15). According to USA Track and Field, she will be the youngest to compete for the U.S. track team since 1972.

2012 silver medalist and former Texas runner Leo Manzano fell just short of making the U.S. team in the 1,500-meter. Manzano nearly caught Ben Blankenship on the final stretch, but ended up placing fourth in 3:36.62. Matthew Centrowitz won with a time of 3:34.09 and Robby Andrews was second at 3:34.88. Blankenship earned the final spot at 3:36.18.