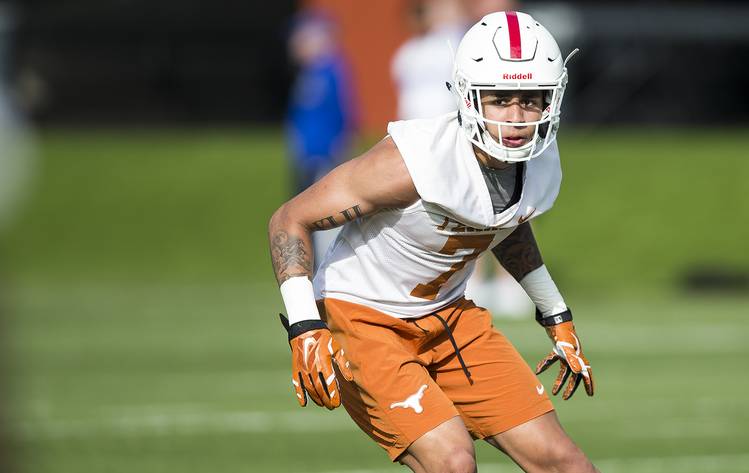 Defensive back Caden Sterns runs through a drill during a Longhorns football at the Denius Fields in Austin on March 22, 2018. NICK WAGNER / AMERICAN-STATESMAN

Before this season, Kris Boyd was placed on the Jim Thorpe Award’s watch list. Another UT defensive back, though, has caught the attention of that award’s voters.

It was announced on Thursday that UT freshman Caden Sterns was named the Jim Thorpe Award’s player of the week. Sterns intercepted two passes in Texas’ 31-16 win over No. 17 TCU this past weekend. For an effort that included five tackles, Sterns also earned the Big 12’s newcomer of the week honor.

The Jim Thorpe Award honors the nation’s top defensive back. Sterns is the fourth recipient of this weekly version of the award. Boise State’s Tyler Horton, Utah State’s Aaron Wade and Akron’s Alvin Davis have also been recognized.

The semifinalists for the yearlong Jim Thorpe Award will be named on Oct. 22. Ex-UT safety DeShon Elliott was a finalist for the award in 2017.

A member of Texas’ 2018 signing class, Sterns has started in all four of UT’s games this season. His three interceptions are one shy of tying a school record for freshmen. No. 18 Texas (3-1) will travel to Kansas State (2-2) on Saturday.