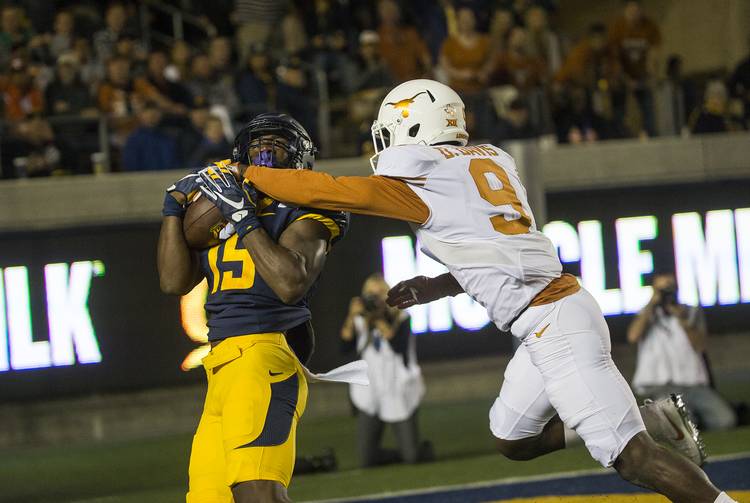 Texas corner Devante Davis loses a touchdown against California's Jordan Veasy during the first half of a NCAA college football game, Saturday, September 17, 2016 at Memorial Stadium in Berkeley, California. RICARDO B. BRAZZIELL/AMERICAN-STATESMAN

Crush an overmatched opponent and cover the spread? Check.

Win on the road? Nope.

On a day where nationally ranked teams were hanging on for dear life, 11th-ranked Texas fell at Cal, 50-43. It was a hard fought, dramatic, thrilling back-and-forth night that ended in controversy: With Cal leading 50-43 with 1:21 left and Texas out of timeouts, Vic Enwere broke through the middle of the line for a 55-yard touchdown that put the Bears up 56-43.

However, replays showed that Enwere actually dropped the ball before he crossed the goal line. Dylan Haines eventually picked the ball up in the endzone, but referees, after reviewing it, awarded the ball to the Bears at the 1-yard line because the ball “wasn’t immediately picked up.”

Texas, instead of getting the ball at the 20 with 1:21 to go, saw Cal take a knee and run out the clock.

It was the final game of the night for the country, and only the latest in a day of upsets.

Earlier in the day, No. 2 Florida State, No. 13 Iowa and No. 22 Oregon fell. And No. 1 Alabama had to rally from three scores down to survive Ole Miss, No. 4 Michigan was scared early by Colorado, No. 16 Georgia won by only 1 point, and No. 20 LSU won by a field goal but was shut out in the second half by Mississippi State.

Shane Buechele was 19 of 33 for 196 yards, with a touchdown and an interception. D’Onta Foreman had 21 carries for 157 yards and two touchdowns. Chris Warren III added 119 yards and two scores.

Cal quarterback Davis Webb, who was the nation’s second leading passer heading into the weekend, was 27 of 40 for 396 yards and four touchdowns. His top target, Chad Hansen, who led the country in catches and receiving yards, was a real Longhorn killer — 12 catches, 196 yards, two touchdowns. The much-malined Cal run defense gave up 307 yards.

Webb will remain No. 2 in the country. The nation’s top passer, Texas Tech’s Patrick Mahomes, had a 470-yard, five-touchdown day.

First quarter (Texas, 17-7): Buechele missed three drives after heading to the locker room following a hard hit to the chest, but Tyrone Swoopes led Texas to back-to-back touchdown drives. It was Chris Warren III, not D’Onta Foreman, who got the start and he produced two touchdown runs.

Second quarter (Cal at halftime, 35-33): A Swoopes interception led to a Cal touchdown, and Buechele re-entered the game. He struck quickly on a 41-yard touchdown pass to Jacorey Warrick, and Brandon Jones’ late blocked punt for a safety gave Texas a 33-28 lead with less than two minutes left in the half. But a Buechele pick allowed Webb to find Hansen for a 23-yard score with 55 seconds left. Trent Domingue had a shot at a 53-yard field goal on the final play, but it was no good.

Third quarter (Cal, 35-33): We thought the second half would be a shootout after what we saw in the first half, but the third quarter was a defensive back-and-forth with some costly penalties thrown in. Freshman center Zach Shackelford was flagged for holding, negating a big run by D’Onta Foreman down to Cal’s 7-yard line. And on Texas’ next drive, Shackelford was called for a false start on a third-and-3 near midfield. Neither drive resulted in points.

Fourth quarter (final, xx): Foreman had a 47-yard touchdown burst to give Texas a 40-35 lead, but Cal converted a fourth-and-1 on its next drive to set up a 1-yard scoring run by Webb. Cal went for 2 and got it, and took a 43-40 lead with 10:45 left. A third-and-9 pass from Buechele to Devin Duvernay for 9 yards on the next drive was reviewed, but upheld, giving Texas new life. Domingue’s 35-yard field goal tied it up, 43-43. A Webb-to-Hansen touchdown put Cal up 50-43 with 3:41 left. Texas’ final drive went nowhere — a miniscule gain on a Buechele pass to Jerrod Heard, and then two Buechele runs for no gain. The Horns opted to punt, which set up the dramatic final Cal drive.

Horns up: Let’s give one to Buechele, who gritted it out despite some hard hits and a trip to the locker room. And to Foreman and Warren, who were under-utilized even though they had 39 carries between them. And to Breckyn Hager, who had a big tackle for loss on third-and-1 in the third quarter. And to freshman safety Brandon Jones, who blocked a punt for a safety late in the first half. And to Swoopes, who made plays with his arm, not his legs, on both of those touchdown drives in the first half. And Warrick, who had another productive night.

Horns down: Domingue missed two field goals, one from 53 and one from 49. Zack Shackelford was flagged for holding and a false start in the third quarter.

Injuries: Buechele left the game briefly (chest) in the first half, but returned. He missed three drives. Sophomore cornerback Davante Davis was shaken up in the second quarter and did not return. Jerrod Heard was seen limping off the field in the third quarter, but he returned later in the fourth. Malik Jefferson hurt his right shoulder or arm late in the third. He returned in the fourth.

On deck: Texas is off this next week, which is perhaps a good thing. The Longhorns’ next game is at Oklahoma State on Oct. 1, the start of Big 12 play.

WATCH: D’Onta Foreman takes it to the house with a 47-yard run