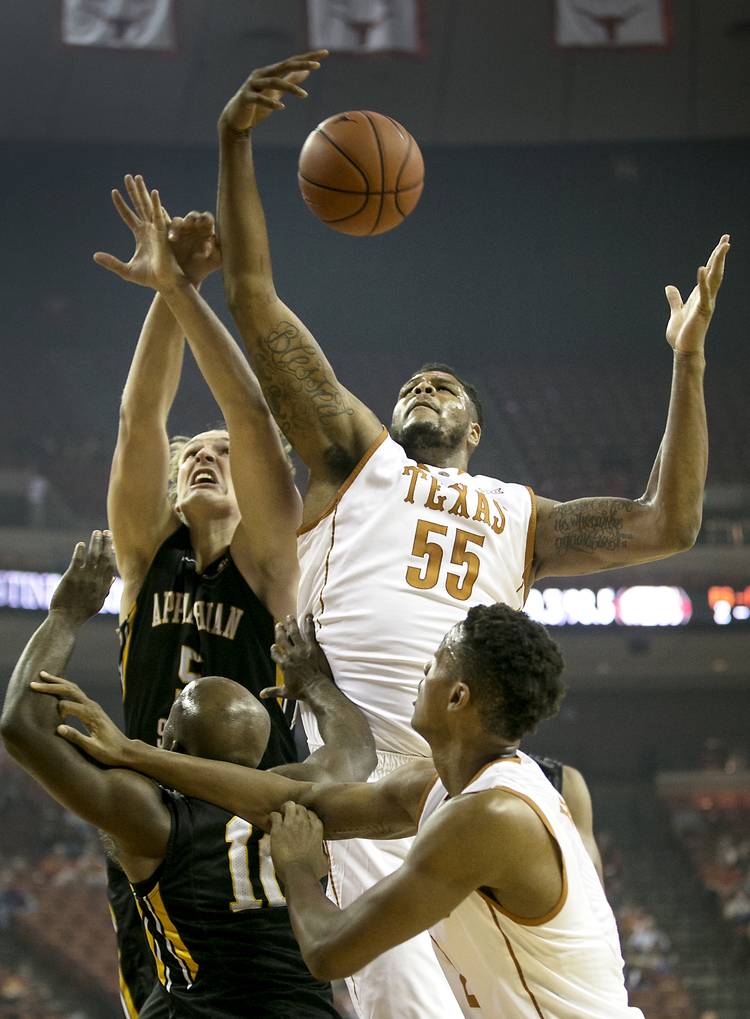 Texas center Cameron Ridley said he hopes to return by the end of Big 12 play in February or March after suffering a fractured foot injury two days after Christmas. LAURA SKELDING/AMERICAN-STATESMAN

LUBBOCK — Texas center Cam Ridley knows when he’d like to come back from the broken foot he suffered two days after Christmas.

“As soon as possible would be the best thing,” Ridley said while leaning on crutches Saturday during pregame warm-ups.

Texas coach Shaka Smart would prefer it to be even sooner, possibly even before Tuesday’s Big 12 home opener against Kansas State.

The Longhorns haven’t figured out how to play without Ridley in the middle. Backups Prince Ibeh (no points) and Shaq Cleare (three points) had virtually no offensive presence in an 82-74 loss to Texas Tech on Saturday. Teammates weren’t even throwing the ball inside to pull defenders into the lane.

“With Prince, because of his foul shooting, I think sometimes guys are hesitant to throw it in there,” Smart said. “But we’ve got to throw him the ball; we’ve got to throw Shaq the ball and make some plays around the basket. We need to play through them even if they don’t shoot it.”

Ridley said he’s never suffered a major injury before. But when he landed awkwardly at practice, the 6-foot-10-inch senior knew something was wrong immediately.

“At first, I felt pain throughout my whole foot, so I thought it was just an ankle sprain,” Ridley said. “After my heart settled down, I noticed it was just pain in one spot. I told coaches that I didn’t feel like something was right.”

Tests revealed that Ridley suffered a fractured foot, something that will sideline him possibly eight weeks or more. Ridley said an orthopedic surgeon and UT trainers thought “it would be good to do something right away.”

“I want to (be back) by the end of conference,” Ridley said. “I’d like to get my feet back under me and get back into the rhythm of playing. I don’t want to just jump into the tournament and not play well.”

With Ridley out, Ibeh and Cleare will see their minutes increase substantially.

“If there’s any pressure, it’s not from people watching me,” Ibeh said. “I just want to have the team in the right spot and avoid things like that. But there’s no outside pressures.”

Despite the loss, Ridley still has high hopes those two can solidify the middle.

“I think we’ll still be good,” Ridley said. “We have guys that can do things like I did. Prince can rebound and block shots, and Shaq can score points in the paint. They just have to take advantage of their opportunity and minutes on the court. If they do that, I think we’ll be good.”