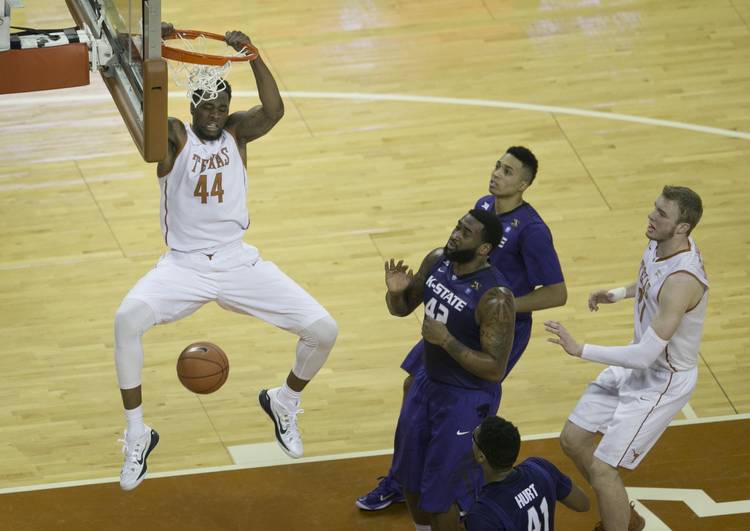 UT's Prince Ibeh dunks against Kansas State in the first half at the Frank Erwin Center on Saturday March 7, 2015. JAY JANNER / AMERICAN-STATESMAN

In today’s Golden’s Nuggets, Cedric touches on some Bevo-related items including the Big 12/SEC challenge, Prince Ibeh’s improvement and hoops over the weekend. Here’s what he had to say on UT:

On a Big 12/SEC challenge in football and one matchup he’d like to see:

Texas vs. Texas A&M: Yeah, I know they already met in the Bahamas in hoops this year, but to resume the football rivalry would make for a Paradise Island in Texas. I know many of you on both sides of the fence have ripped me for beating this dead horse over and over again, so I apologize for the latest whack, Mr. Ed.

Prince Ibeh’s improvement of late may not be on the same level as Buddy Hield in Norman, but his recent contributions are humongous for Texas, which took what could have been a critical hit when post Cameron Ridley went down with a broken foot. And what about those free throws? Prince had hit 10 of his last 12 over the last two games entering Monday night’s game in Waco. … Take notes, DeAndre Jordan.

On the Big 12/SEC challenge in hoops:

Saturday’s Big 12/SEC Challenge did nothing to dispel the notion that the Big 12 is the best conference in college basketball after it topped the SEC 7-3 in 10 head-to-head matchups.

The whole idea of matching the two conferences in the middle of league play was a great idea. It allowed teams in both conferences to take a breath before making the final push to the NCAAs.

For the rest of Ced’s Nuggets, including his thoughts on ESPN’s Outside the Lines commentary on Baylor and Terrell Owens in the Hall of Fame, click here.