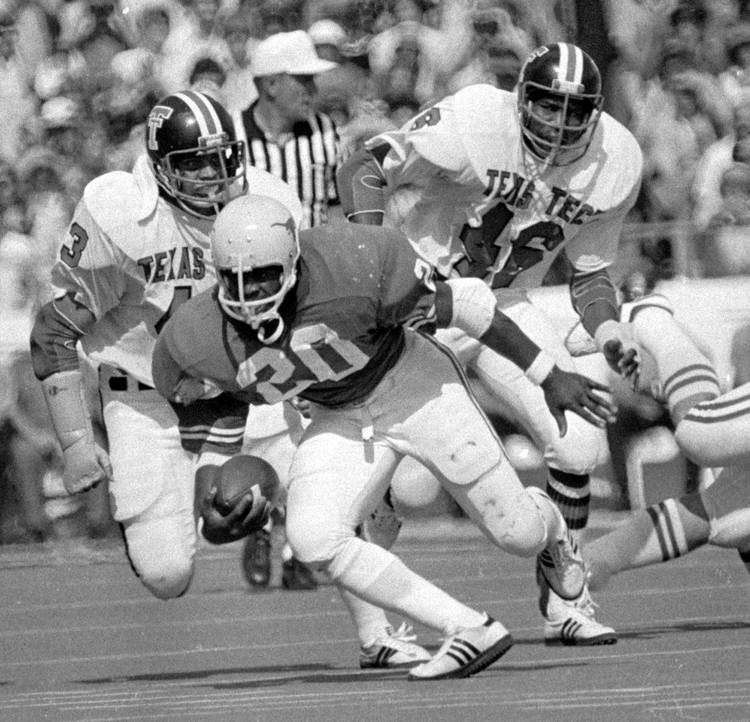 “Earl Campbell was on hand in Waco to celebrate Akers’ induction at a luncheon and had everyone in stitches. On Oklahoma head coach Barry Switzer: “We’re old now, so we can tell these things. Barry Switzer told me, ‘You come to school here, and we’ll take care of clothes and anything you need.’ I told him my people have sold themselves enough. I’m not for sale.” On his speed: Campbell said he ran a 4.7 in the 40, but Akers interjected, “If you ran a 4.7, it’s because you were carrying two tacklers.” On being the No. 1 NFL pick in 1978: Campbell said the Houston Oilers were set to draft Oklahoma State running back Terry Miller, but Texas defensive coordinator Leon Fuller was in town and went to see Bum Phillips. “He told Bum they should take me instead, and Bum went back in the staff meeting and said, ‘We’re going to take Earl Campbell.’ ” Miller went fifth to Buffalo, lasted parts of four seasons and totaled 1,583 yards. Earl almost had that many on a Monday night against the Dolphins and finished with 9,407 yards.”

“Fred Akers received one of the biggest honors of his life in one of the lowest moments of his life. Just more than a week after his son, Danny, died at age 54 of renal cell carcinoma, the former Texas head football coach was inducted into the Texas Sports Hall of Fame on Tuesday. Akers was one of the best Longhorns coaches in any sport that I’ve ever had the privilege of covering, but he’s never gotten his due. There’s no statue, no name on a football building for the Blytheville, Ark., native, who had to replace the legendary Darrell Royal without the support of all the DKR acolytes. Akers blew up at me regularly for my daily coverage of the beat, then treated me and every other reporter more professionally than any Texas football coach since. He was a man’s man who basically got a raw deal at Texas, being fired after one losing season. And he came within a win of two national championships.”

“Former Texas guard T.J. Ford, who also was inducted into the Hall of Fame, was Kevin Durant before Kevin Durant. Not sure Texas ever lands Durant without Ford taking the Longhorns to their first modern-day Final Four in 2003.”

On Cam Ridley taking a medical redshirt this year:

“And for those curious if Texas senior center Cam Ridley could take a medical hardship season, forgo a comeback late this season and return next year, I’m told his 11 games are one too many for consideration, and Ridley is still bent on returning late this month even though he can’t put weight on his broken foot.”

For the rest of Kirk’s thoughts including his takes on Shaka’s coaching, the Houston Astros’ chances this year and Johnny Manziel winning titles in professional football, click here.

Our favorite #NationalSigningDay tweets from @ChuckFnStrong