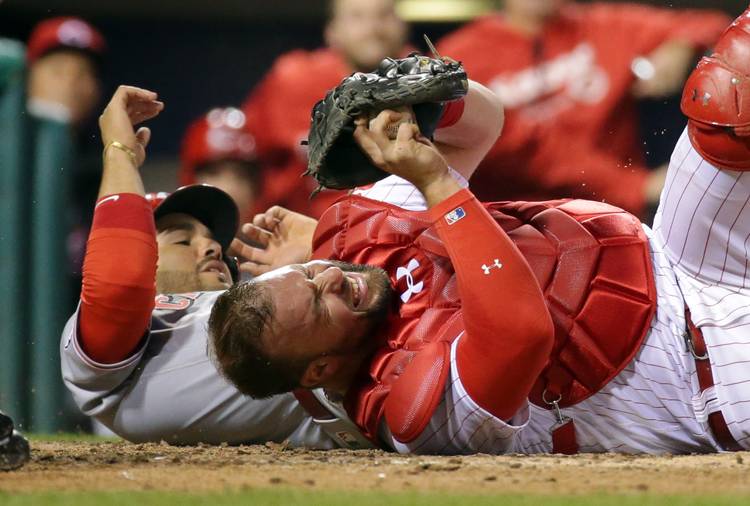 PHILADELPHIA, PA - MAY 14: Cameron Rupp #29 of the Philadelphia Phillies tags out Eugenio Suarez #7 of the Cincinnati Reds during a collision at home plate in the ninth inning during a game at Citizens Bank Park on May 14, 2016 in Philadelphia, Pennsylvania. The Phillies won 4-3. (Photo by Hunter Martin/Getty Images)

Had to share this.
Phillies catcher Cameron Rupp is cut from a long line of hard-nosed baseball players produced by the University of Texas and that toughness was on full display Saturday night at the end of his team’s 4-3 win over the Cincinnati Reds.
Check it out. The video speaks for itself.

Reds runner Eugenio Suarez did everything he could to separate Rupp from the ball but the 6-2, 260-pound veteran held on to preserve the win.
Rupp played high school football at Prestonwood Academy but nothing that happened on the gridiron topped this collision.
“That’s the hardest I’ve been hit in anything I remember,” he told me via DM.

It brought to mind Pete Rose’s epic trucking of Ray Fosse in the 1970 All-Star game but in that case, the runner won the battle.

Rupp was the hero in his collision 46 years later. As a result, his Phils, at 22-15, are breathing down the necks of the NL Central leading Washington Nationals.

In a season where his college team has fallen upon hard times, Rupp gave Horn fans a reason to smile Saturday.