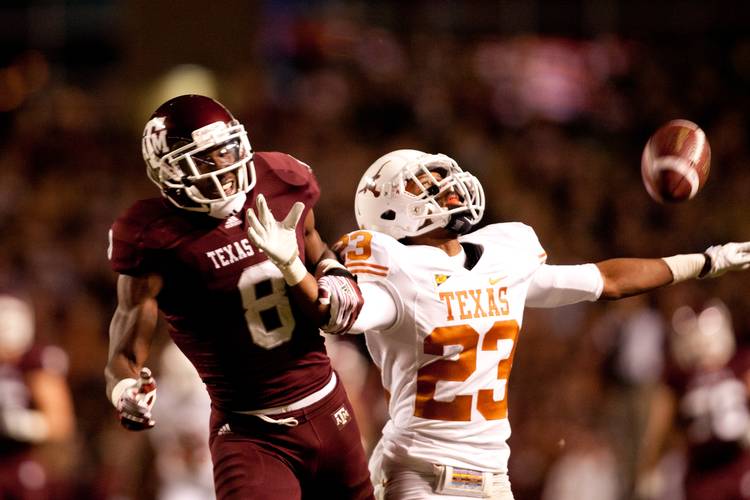 Carrington Byndom #23 of the Texas Longhorns breaks up a pass intended for Jeff Fuller #8 of the Texas A&M Aggies in the first half of a game at Kyle Field on November 24, 2011 in College Station, Texas. (Photo by Darren Carroll/Getty Images)

Carrington Byndom, waived by the San Diego Chargers on Tuesday, was signed by the Baltimore Ravens on Wednesday.

The Ravens are struggling with injuries at the cornerback position and signed the 24-year-old out of Texas ahead of their preseason game on Saturday against the Indianapolis Colts.

Byndom didn’t make the field last season, but he played sparingly for the Panthers in 2014. The team signed him as an undrafted free agent earlier that year.

The Arizona Cardinals signed Byndom to their practice squad midway through the 2015 season and then waived him in July of this year.

Byndom started for the Longhorns in 39 consecutive games and was a two-time All Big 12 selection.

Bumps, bruises piling up for Longhorns in August

Longhorns in the Olympics: Day 12