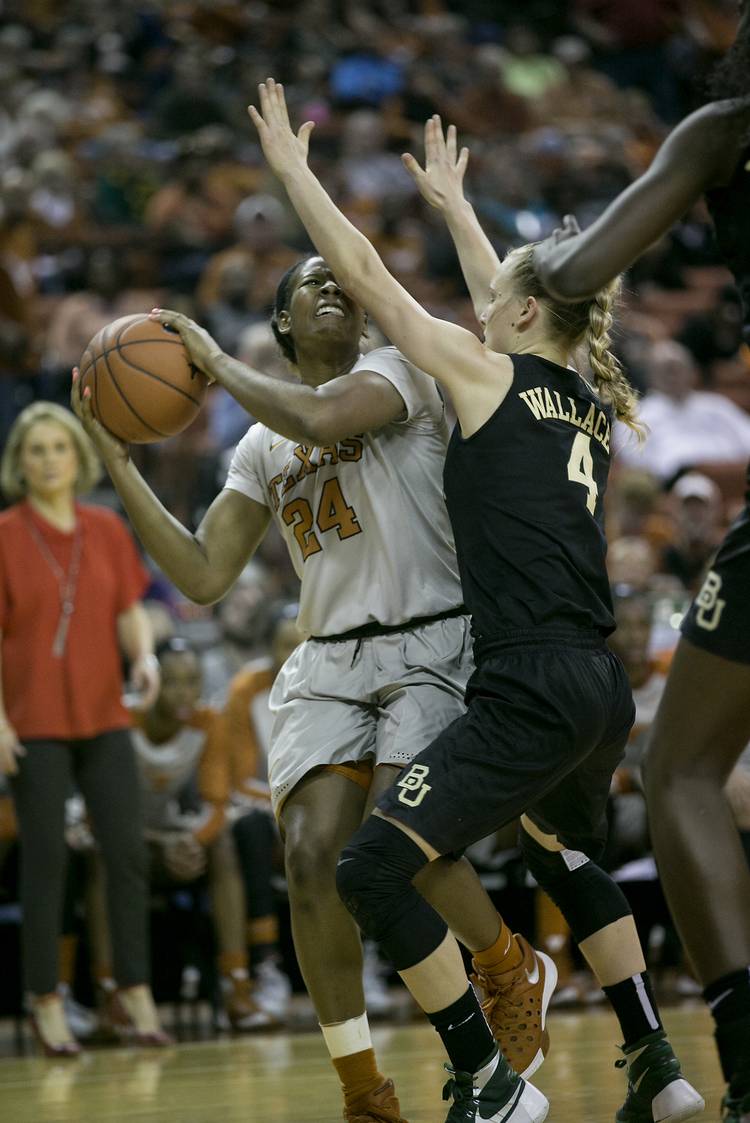 (WOMEN'S COLLEGE BASKETBALL: TEXAS, BAYLOR); The University of Texas Women's basketball team played Baylor at the Frank Erwin Center in Austin, January 17, 2016. This was a key game in the Big 12 race. They'll play again in Waco on the final game of the regular season. Ariel Atkins tries to score with Kristy Wallace blocking her. LAURA SKELDING/AMERICAN-STATESMAN

Imani Boyette had a team-high 19 points and 10 rebounds in Wednesday 65-58 victory at TCU. For just the second time this season, the Longhorns were outrebounded. The 6-7 post needs five rebounds to become the fifth player in UT history to reach 900 career boards. Ariel Atkins scored a season-high 13 points in the victory over the Horned Frogs while Celina Rodrigo contributed season-highs in assists (6) and steals (4).  It was coach Karen Aston‘s 75th victory at Texas…. The Longhorns will seek their 999th career victory on Saturday. If they win, they can reach 1,000 with a home game Wednesday against Kansas…. Roughly 40 former UT players and managers are expected to attend the game as part of the University’s Texas Exes Weekend.

Before the game, Texas will have a ceremony for Sooners coach Sherri Coale, who was recently selected for induction into the Women’s Basketball Hall of Fame June 11 in Knoxville. Her record at OU is 433-210 over 19 seasons. Oklahoma has reached the NCAA Tournament 16 straight years…. The Sooners are coming off a 92-53 victory over Texas Tech Wednesday in Norman. Kaylon Williams scored 18 points on 8-for-10 shooting and became the 31st player in team history to record 1,000 career points…. Texas won two of three against OU last season, winning 84-81 in double-overtime in Austin and losing 70-59 in Norman. Texas beat the Sooners in the Big 12 Tournament 59-46…. Oklahoma is 12-0 when outrebounding its opponents, 1-4 when opponents win the battle of the boards.