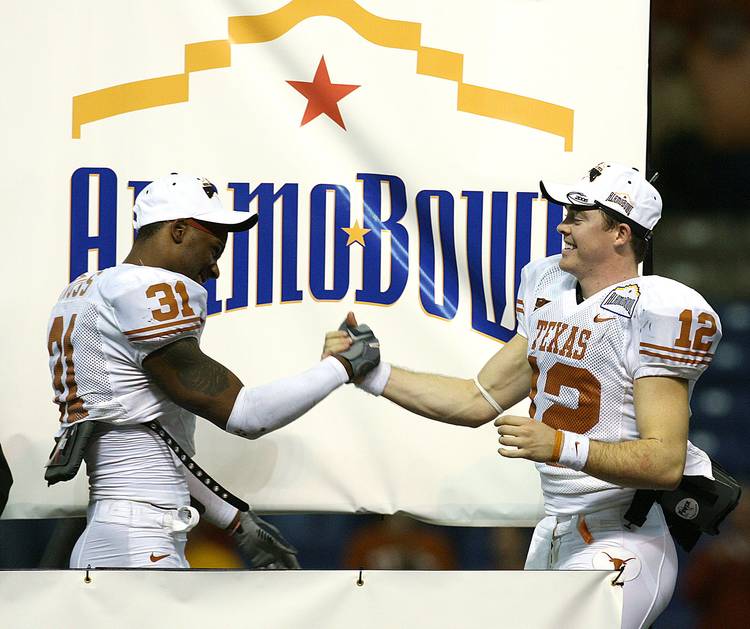 Unless it gets into and wins the Big 12 championship game, Texas is looking more and more like a strong fit for the Alamo Bowl to play Washington, Washington State or Utah. But there’s still an outside chance as many as three Big 12 teams could find themselves in the New Year’s Six games. The Alamo, to be played on Dec. 28, pays out more than $4 million per school and would be thrilled with landing Texas for the first time since 2013. But that bowl has never had Oklahoma, West Virginia or Iowa State, and all three would travel greater distance and spend more hotel nights in San Antonio than the nearby Longhorns. West Virginia played Utah in last year’s Heart of Dallas Bowl, so that could be a factor, and also has played twice in the Lone Star State already in Austin and Lubbock. “The last four years, there’s been only four top-15 (ranked) matchups outside the CFP, and we’ve had all four of them, and it looks like we’ll have a top-20 matchup this year,” Alamo spokesman Rick Hill said. He said they’ll consider head-to-head matchups, potential storylines and star power of the players. You’ve got to figure a Washington State-Texas pairing would be sexy with the newly mustachioed Mike Leach on one sideline. But the Cougars are still hopeful of a New Year’s Six date. Hill said the Alamo Bowl has had 10 games since 2005 that have come down to final two possessions of the game. That sounds right up Texas’ alley.

The Longhorns basketball team has some work to do. Yes, it’s 3-0 but hasn’t shot the ball well (24 of 81 threes, 29.6 percent) and isn’t getting the most out of sophomores Jericho Sims and Matt Coleman. But Shaka Smart likes the early contributions from new guards in freshman Courtney Ramey from St. Louis and Eli Mitrou-Long from Mount St. Mary’s. “I like him a lot. He has a moxie,” Smart said of Ramey. “He has a pure heart about how to play the game, and that goes a long, long way, in terms that will be infectious.” Smart said Monday night he wasn’t happy with Mitrou-Long’s first-half play but added, “Then, we got on the same page. He obviously gave us a good spark.” Amen to that. Texas looks to be offensively challenged (again) but one that’s very athletic, can bang inside, will press more than every before and can get to the rim. … Del Conte said he wasn’t worried about the lagging attendance at home games because of great season ticket sales. Texas has sold 6,176 of them.

On whether defensive lineman Charles Omenihu will cry on senior night:

Charles Omenihu isn’t sure whether he’ll cry on Senior Night or not. “I’m not a fortune-teller,” the Texas defensive end said. “I live day to day.” He obviously will play in the NFL. After that, “I think I may go on TV or in management for a college or pro team. I think I’ve got a nice face for TV.” … Senior nose tackle Chris Nelson said, “I’ll never forget that first summer when I was a freshman. It was the worst. We were supposed to run a mile-and-a-half on the track. I ran two laps and thought I’d run six. I just lay there.” … I’m wondering if part of the misfortunes of the defense is overwork. In an attempt to be the most physical team, is it possible Tom Herman’s teams hit too much during the week and wear themselves out? Their fourth-quarter fades have become legendary.

For the rest of Kirk’s 9 Things, including his thoughts on the Golden State Warriors’ “In The Building” pass and what he would do as the college football czar, click here.

The Whys of Texas: Big 12 tiebreakers are murky, but moot if Texas doesn’t finish strong