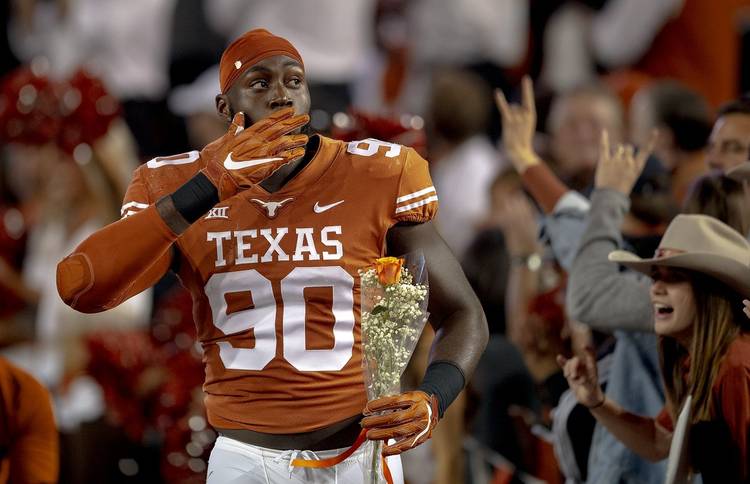 Texas defensive lineman Charles Omenihu (90) blows kisses to the crowd as he is announced during senior night presentations before an NCAA college football game against Iowa State in Austin, Texas, on Saturday, Nov. 17, 2018. [NICK WAGNER/AMERICAN-STATESMAN]

Now that the NFL season has a bow on it, the focus of the league becomes free agency, off-season trades and the 2019 NFL draft, held April 25-27. The league will first host the NFL combine that starts on Feb. 26.

On Monday, Bleacher Report released a full seven-round mock draft, and six Longhorns are slotted to be chosen, starting with defensive lineman Charles Omenihu to be picked by the Jacksonville Jaguars in the third round. The Big 12’s defensive lineman of the year compiled 45 tackles, 18 for a loss and 9.5 sacks during the 2018 season.

The five other Longhorns projected to be picked are:

Linebacker Gary Johnson, fourth round by the New York Giants

Cornerback Kris Boyd, fourth round by the Buffalo Bills

Wide receiver Lil’Jordan Humphrey, fourth round by the Buffalo Bills

Defensive lineman Chris Nelson, seventh round by the Denver Broncos

Bleacher Report has Ohio State defensive lineman Nick Bosa going first overall to the Arizona Cardinals. The first Big 12 player projected to be chosen is Oklahoma quarterback Kyler Murray, picked by the Jaguars with the seventh pick of the first round.

Last year, four Longhorns were chosen in the 2018 draft with offensive lineman Connor Williams being the first one picked by Dallas Cowboys in the second round. The Cincinnati Bengals picked linebacker Malik Jefferson in the third round with the 78th overall choice. Punter Michael Dickson was selected by the Seattle Seahawks in the fifth round – he was named first-team All-Pro in his first season.

Safety DeShon Elliott was selected by the Baltimore Ravens in the sixth round.

Editor’s note: This story was edited to reflect the correct amount of Longhorns chosen in Bleacher Report’s mock draft.