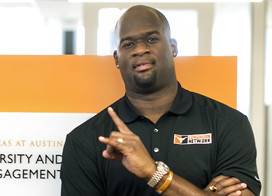 Tyrone Swoopes shares a campus with the most electrifying quarterback to play here. So why hasn’t University of Texas employee Vince Young sat down with his Texas descendant over the past year?

Young has said in the past that he wanted to meet with Swoopes — who was named the Longhorns’ starter on Monday — but it hasn’t happened yet.

There’s no time like the present, VY. It’s not as if Swoopes has this whole quarterbacking thing down to a science. His well-documented struggles in 2014 should have made a mentorship under VY a no-brainer. A quick visit after practice or between Longhorn Network gigs … a few questions in Mr. Young’s office ever so often … a couple of text messages here and there between pupil and college football legend wouldn’t hurt.

When asked if he has spoken with Young this summer, Swoopes said, “I’ve seen him around at practice and things like that, but I haven’t really sat down with him one-on-one.”

It’s a real waste of institutional knowledge. The coaches can only tell this kid so much. He needs to hear from someone that has been under center for Texas. Three hours with Shawn Watson is important, but 10 minutes talking to Young about handling expectations in a big game like Notre Dame would be invaluable.

The Swoopes we interviewed Monday was still hesitant to grasp the idea of boldly coming out and proudly saying the Longhorns are his team. He is in real need of a role model who played the position at a high level and dominated the type of games he can only dream about at this point.

It didn’t come easy for Young at first. I remember senior Chris Simms pulling the freshman Young aside and giving him some needed pointers on the offense at practice and in the spring game. Later, when Young was struggling as a pro in Tennessee, the newly-signed Simms took him out to dinner and gave him counsel when he needed it most.

This would be a good time for Vince to pay it forward.