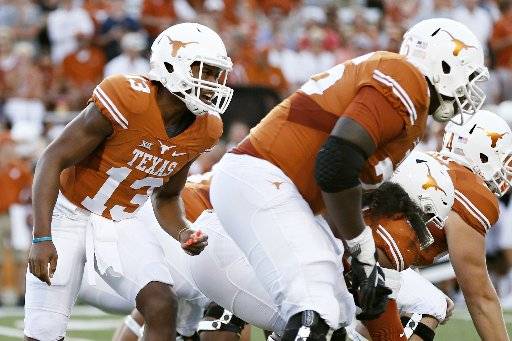 Here are three Nuggets from the first half.

A certain good looking columnist wrote this week that Charlie Strong should start Jerrod Heard and make Jay Norvell the play caller. So far, so good. With Norvell calling plays from the sideline, Heard took the field for his first start and electrified the not-packed Royal-Memorial Stadium with a 50-yard scramble (reduced to 35 after a penalty) and a 32-yard touchdown pass to Armanti Foreman.

Heard may not be the second coming of Vince Young but he certainly gives the offensive an explosive dimension that was that was sorely lacking with Tyrone Swoopes in there. Heard has run 7 times for 68 and has completed 3 of 4 passes for 51 yards and a TD.

It is reminiscent of the 2004 season when Young took over for Chance Mock, the difference being that Mock was one of most efficient quarterbacks in the nation when he lost his job.

After totaling 163 yards in four quarters at Notre Dame in the opener, the Horns came out smoking under Heard. The 80 yards on the first drive was nearly half of what Texas mustered in South Bend. Call it a step down in competition or a step up in athleticism at quarterback…either way, it’s an improvement.

The Horns have 157 yards, a total that would be higher if not for the 141 yards in punt returns.

Putting the ‘special’ in special teams

Up until Saturday, Daje Johnson had not done much outside of an ill-advised decision to release a rap song entitled Dealer. But to the delight of head coach Charlie Strong, who has shown the patience of Job with his senior, Johnson showed up early against the Owls with an 85-yard punt return for a touchdown. Chuck out Strong above. You think he’s excited about some big plays finally happening?

Not to be out-done, senior Duke Thomas returned another for 56 yards to set up Texas’ third touchdown.

Over the last four seasons, Texas has been a wasteland when it comes to big special teams plays. Two arrived at the perfect time in the first half.

The only special teams gaffe was punter Michael Dickson, who uncorked a 17-yard punt to set up Rice’s final score. Through the first six quarters, Dickson has punts of 28, 28, and 17 yards. Inexcusable.

Defense up and down

Texas is up 21-14 but the defense has had its problems with Rice and its shifty QB Driphus Jackson on the run.  The Owls are running right at the Texas front and when forced out of the pocket, Jackson has been extremely slippery, evading the blitzing Malik Jefferson and Co. on several occasions.

Jackson led the Owls on a 16-play, 87-yard drive late in the second quarter, which was punctuated by Samuel Stewart’s swan dive into the end zone.  Jackson kept the drive alive by going 4-for-4 on third down.  The Owls are 9-of-12 on third down overall.

The defense gave up 223 first-half yards but kept the Horns up on the scoreboard with a pair of red-zone interceptions but the first, by Jason Hall, was fumbled back to Rice.