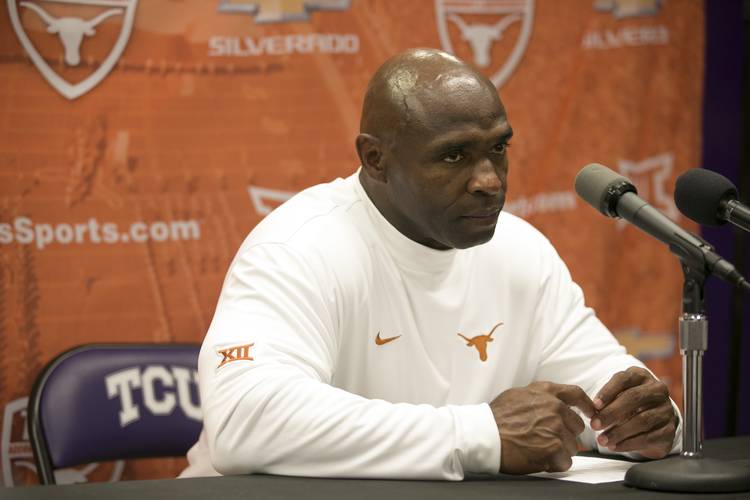 Texas coach Charlie Strong had to answer questions about why freshmen cornerback Kris Boyd was on his phone at halftime of the TCU game. (RODOLFO GONZALEZ / AMERICAN-STATESMAN)

Charlie Strong is in a tough spot. With just one win under his belt this season, there are plenty of folks ready to pull the plug on the coach in the middle of his second season at the University of Texas. Some fans take to social media to ask for Strong’s dismissal, including a since-deleted tweet on the Texas Rangers account that quickly went viral.

Despite the negativity, Strong has fans in his corner. Rick Cherwitz, the Ernest S. Sharpe Centennial Professor in UT’s Moody College of Communication, writes in a special opinion piece for the Austin American-Statesman that fans need to be patient with the coach trying to turn things around at Texas.

“At the end of the day, patience in all areas of life, including sports, is a virtue we should practice. And setting appropriate and reasonable expectations is a must. Running a clean, honest college football program that graduates players, for example, is a program that people who claim to love college athletics should be proud and support.”

Read the full article at MyStatesman.com.

Bevo XIV will miss Texas-OU due to ‘life-threatening condition’