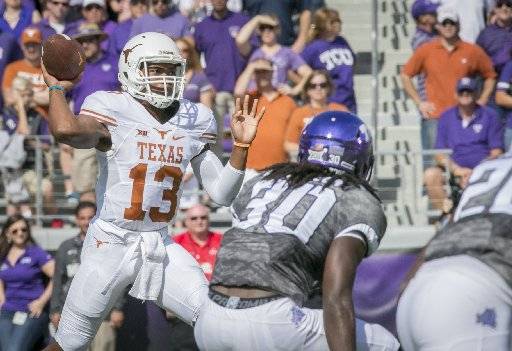 DALLAS — Some early thoughts as lurch toward kickoff here at the sunny Cotton Bowl.

Here’s what has to happen for the Texas Longhorns and their young quarterback to pull off an upset.

Get off to a blazing start

This is as as low as I’ve seen the Texas program in the last 20 years. The Sooners may profess a healthy respect for their opponent, but deep down, they believe this will be a blowout. It’s up to Texas to sow some seeds of doubt in OU early and that can only come with a quick start. Texas has to jump out in front, hit OU in the mouth and send a message that this will be a ballgame.

This is the kind of play that would give Texas the kind of belief it needs to pull this thing off.  After Chris Whaley scored, the Horns were emboldened and Case McCoy took it from there to engineer the upset with some great throws to Mike Davis and a young receiver by the name of Marcus Johnson, who hasn’t done much since.

Heard has to make throws

Jerrod Heard is a great runner but he has to show the Sooners he can make plays downfield with his arm. If he can hit on some throws early to John Burt, Armanti Foreman, Johnson and young tight end DeAndre McNeal, who has a speed advantage over the Sooner linebackers, that will open up running lanes later in the game.

I expect OU to employ linebacker Eric Striker in the role of spy which means he will be follow Heard’s every mover. If Heard can make some plays in the passing game, Striker’s job will be much more difficult.

The defense has to show up

Vance Bedford’s defense was a serious non-factor in Fort Worth after scoring two touchdowns against Oklahoma State. Baker Mayfield is having great first half of the season and Bedford’s  top priority has to be putting Baker on his butt early in the game. The Horns haven’t gotten a good pass rush from the front four so expect Vance to do what he enjoys doing best..send the house.

It’s a risky proposition, especially since the Sooners have a great corps of receivers, led by Sterling Shepard, but these are desperate times so Vance will have to roll the dice to create chaos. I think it’s worth the risk. The Horns have nothing to lose.

How it plays out

The Sooners are a team that realizes it can make some real noise in conference many feel to be a two-team race between TCU and Baylor. Bob Stoops would love nothing better than to hang a 60-burger on the Horns for fourth time, albeit against a coach he really respects in Charlie Strong.

Business is business. I see the Sooners winning 42-24.