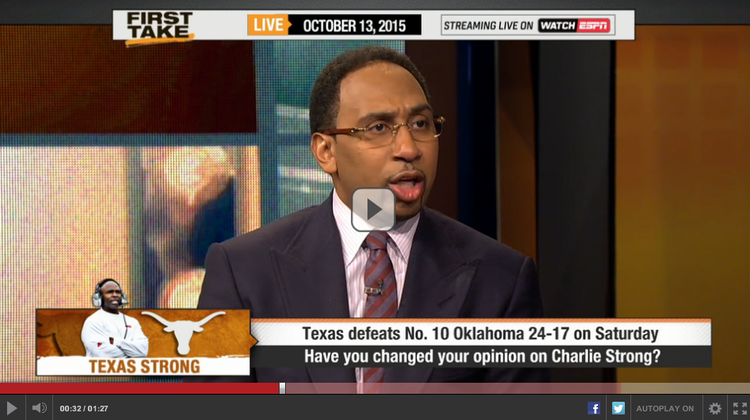 Despite the Longhorns’ 24-17 win over No. 10 Oklahoma, ESPN’s Stephen A. Smith – who said last week that Texas should part ways with Charlie Strong – hasn’t changed his opinion on the football coach.

“I don’t believe I was hard on Charlie Strong at all, because I wasn’t pointing the finger at him,” Smith said Tuesday. “I’m talking about the environment that he is in.”

Smith said that under “the right circumstances,” Strong can take a program to an elite level. But what about with the Longhorns?

“My issue with Charlie Strong at Texas is that that is a proud institution that has incredible tradition, loads of money and resources, that they would prefer to leave at the hands of someone else,” he said. “It is clear that they didn’t really want Charlie Strong. The AD [Steve Patterson] wanted Charlie Strong. He is now gone.”

Watch the full clip from “First Take” below: