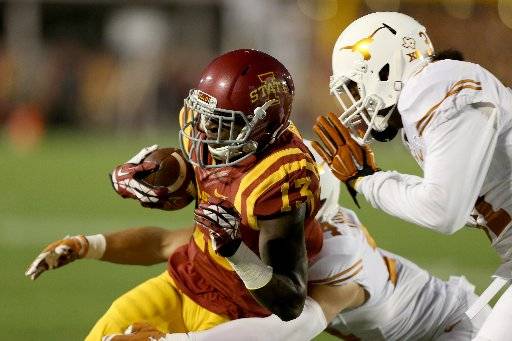 A few Nuggets from what was a really uninspiring first half from the Texas Longhorns, who trail Iowa 10-0 on the road.

It’s far from over

Strange as it sounds, the Horns are very fortunate to be down only 10 points at the half.
Iowa State went up and down the field on Texas in the first half but the important stat is what shows on the scoreboard and that’s 10 points. The Horns will take that all day long.
As for that goose egg on offense, the Horns are going to have to find it from somewhere. They totaled 98 yards of offense in the first half with only 26 coming through the air.
Iowa State dominated TCU in stretches last week and that’s a much better team than Texas.
The Horns are going to have to change some things up to get back in this game.
Texas is 0-10 under Charlie Strong when an opponent scores first.

The Horns are pretty anemic offensively — running back D’Onta Foreman is battling a toe injury — and young Jerrod Heard hasn’t put his stamp on this game. In fact, he has struggled mightily with an interception and a couple of other throws that could have been picked.
Heard is a tremendous talent but he doesn’t look to have it tonight. I’m not saying Tyrone Swoopes should be reinstalled as the starting quarterback but it’s possible he gives Texas a better chance to win tonight. When he got extended action at one point in the second quarter, he produced a pair of first downs before Heard re-entered the game and threw an interception.
The coaching staff seems unwilling to allow Heard to throw the ball against this defense. This could be the night when Swoopes gives them what they need to get a win.
I would start him in the second half.

No answer for Warren

Running back Mike Warren is quietly having a season that’s in the same statistical production area as Heisman candidate Leonard Fournette. He stepped off 80 on only 14 carries in the first half, most of those yards coming on first-down plays.
Warren’s play also allowed quarterback Joel Lanning, who replaced Sam B. Richardson last week, to pick his spots as well. A mobile quarterback has been the Horns’ Kryptonite for some time now and Lanning’s legs were a problem in the first half.
Thankfully for Texas, he has completed onIy 8-of-22 passes (with a handful of drops). I expect defensive coordinator Vance Bedford to continue to bring the house but that’s a dangerous play if the Horns continue to allow Warren to chew them up in the run game.

The Horns were shut out for the third time in the first half this season and in the two others — Notre Dame and TCU — they were blown out.
Texas will show up in the third quarter but the quarterback — be it Heard of Swoopes — will have to make some plays downfield. Plus that offensive line will have to do a better job of protecting. I expect Strong to stick with the run early in the second half but passes will have to be completed if the Horns having any hope of leaving Ames at 4-4.
I expect to see much more Tyrone Swoopes in the second half.