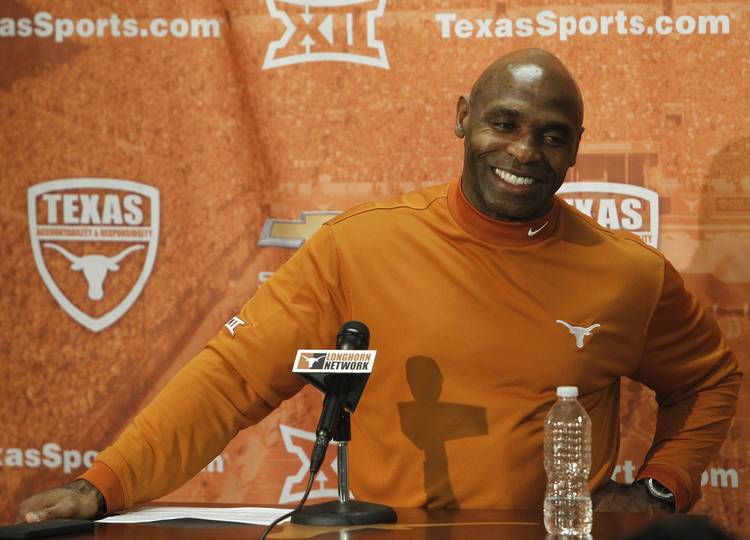 Wednesday was a landmark national signing day for Charlie Strong and his staff. After the Horns’ 2016 class ranking was hovering around the 30s to begin the day, Strong saw seven previously uncommitted recruits sign with Texas by mid-afteroon. In all, the Class of 2016 had a ranking that was near Top 10 nationally, and Charlie had ‘a good day’ Wednesday.

But what did the Longhorns players and recruits think of national signing day? Here’s a sampling of their reactions on Twitter:

2016 signee WR Davion Curtis from Temple is pleased with his decision:

2016 signee DL Tope Imade commenting on Jones’ commitment and the documentary made about him on a Texas A&M recruiting website:

TAMU isn't being known for their recruiting class this year, but for their infamous movie on one my teammates that committed. 💀

2016 signee DeMarco Boyd on his clothing of choice on signing day:

did I seriously get asked why I have so much burnt orange on today? stupid question! my class just ranked TOP 10 recruiting! ✌🏾️😤🐂🐂🐂

Freshman wide receiver John Burt on the class and the future of the program (national championship?):

2016 signee defensive lineman Jordan Elliott on the attitude he and his classmates will bring:

Defensive lineman Quincy Vasser throwing some shade toward the team in College Station (presumably as the Horns passed the Aggies in the rankings Wednesday):

2016 signee Reggie Hemphill-Mapps celebrating with other college commit Deontay Anderson their next step in their football careers:

Who got that juice playa!!!

Defensive back Deshon Elliott on the Longhorn tally from Wednesday:

We told y'all to #Believe 🐂

Defensive back Holton Hill shout out to the 2016 signees:

Most recent King of #LBU @superdj56

Newsome’s thoughts on the Aggie that trolled the Longhorns earlier in the week:

Linebacker Anthony Wheeler following the commitment tally while in class:

Im in class & trying to see who committing lol 😂😂📝