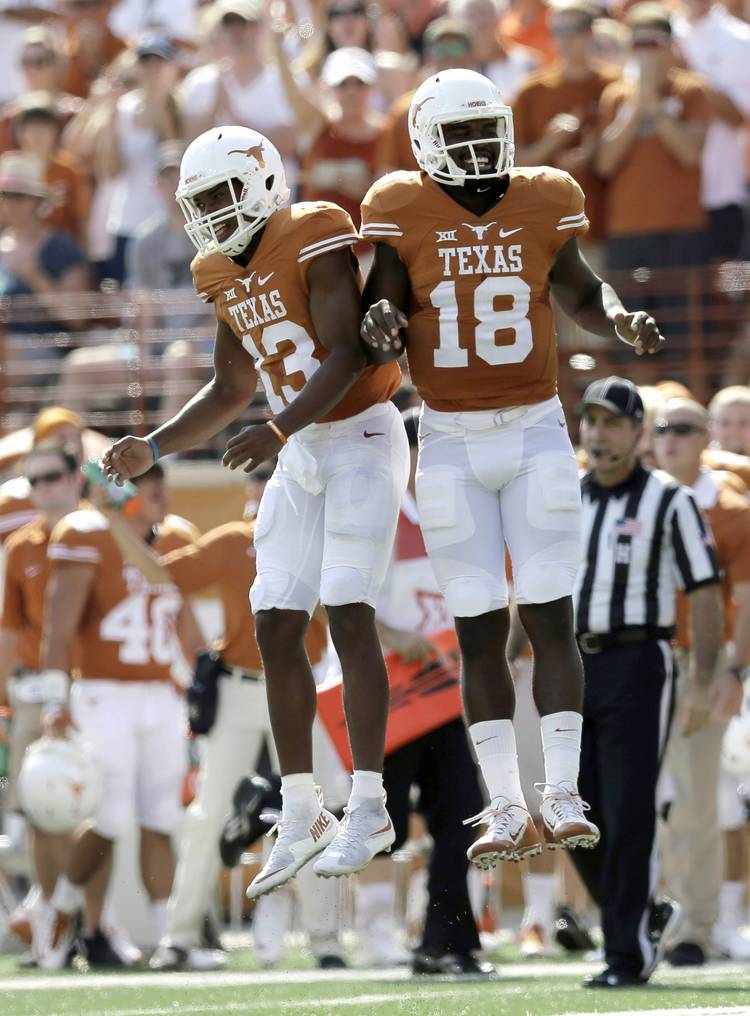 There hasn't been much to celebrate lately between quarterbacks Jerrod Heard (13) and Tyrone Swoopes (18). Swoopes will get the starting nod since Heard suffered a concussion against Texas Tech. (AP Photo/Eric Gay, File)

With Texas’ 2016 recruiting class in the books, next season’s roster has snapped into focus.

Here’s a look at the quarterbacks:

The depth Shawn Watson had longed for at this position is finally here, though, ironically, Watson is not. Before he was fired in December, Watson was able to add Locksley and Merrick in 2015, Buechele this year, and Westlake’s Sam Ehlinger in the 2017 class. Yet UT never landed a transfer to come in and start right away, and thus, options at the team’s most important position entering an important season for coach Charlie Strong are at this point uninspiring.

It’s hard to see anyone unseating Heard, who probably gets another chance after going 5-6 in his first season as the starter. His ability to throw an accurate deep ball fits nicely into the new spread system being installed by Sterlin Gilbert. It’s the intermediary throws where Heard must improve upon the most.

Last year, Locksley and Merrick never got to the point where they were close to seeing the field. It was not exactly a ringing endorsement for Locksley, a four-star recruit, when play-caller Jay Norvell told the media late in the season that Merrick, an afterthought in the 2015 class, was neck-and-neck with Locksley as the emergency QB after Heard and Swoopes.

Call it a hunch, but Swoopes’ days as a traditional QB may be over as his skills at this point in his career seem better suited for the ’18-Wheeler’ package or as a H-back. Any practice snaps at QB for Swoopes could instead go toward developing a younger guy, and that’s a sacrifice Gilbert might not be willing to make. So again, call it a hunch that Swoopes’ days as a full-time QB are over.

That leaves Buechele, the state’s No. 1 QB, who is already on campus and will participate in spring ball. It’s hard to see Strong starting a freshman QB for the second year in a row, but don’t rule it out, either, because no one has pinned down this spot.