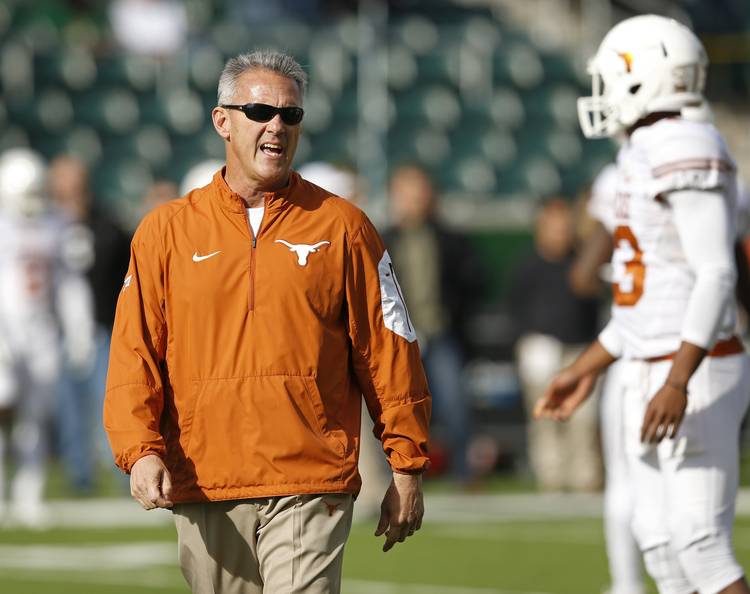 With reports that defensive backs coach Chris Vaughn and wide receivers coach Jay Norvell are departing the 40 Acres, we take a look at the eight coaching turnovers that Charlie Strong has had in his two-plus years tenure at Texas:

Chambers was the lone holdover from former coach Mack Brown’s staff. He first came to Texas in 1998.  Koenning played at Texas during the late 1970s and ’80s.

Out: Assistant head coach for defense Chris Rumph When: Feb. 6, 2015

Another hire from Strong’s original staff, Chris Rumph, left the program shortly after one year on the job. He was hired away by Florida with the same coaching title, reuniting in Gainesville with then-new Gators coach Jim McElwain, his old co-worker on Nick Saban’s staff at Alabama. In his one year at Texas, Rumph received credit for Texas signing five players in the 2015 class, including four-star running back Chris Warren of Rockwall.

He was replaced by Brick Haley, a former LSU defensive line coach.

At the same time Texas announced the hiring of offensive coordinator Sterlin Gilbert and offensive line coach Matt Mattox, the school released a statement that Shawn Watson and Joe Wickline would not be retained. Watson was the team’s primary play-caller for one year and one game at Texas before being demoted by Charlie Strong for Jay Norvell after a disastrous opening-season loss to Notre Dame in 2015. Wickline eventually landed a similar position at another Big 12 school, West Virginia.

At the beginning of the year, Tommie Robinson left for a similar position at USC. His departure meant none of Charlie Strong’s initial offensive staff from 2014 would be around in year three. Robinson had previously coached at USC for one year, in 2013, before joining Strong in Texas.

As of Feb. 12, no replacement has been named though former Texas running back Anthony Johnson did interview for the position earlier this week.

Defensive backs coach Chris Vaughn parted ways with Texas Thursday over his alleged involvement in the NCAA scandal engulfing Ole Miss. Vaughn was responsible for recruiting the Houston area. He was the primary recruiter assigned to Nacogdoches’ Brandon Jones, considered the nation’s No. 1 safety prospect.

Wide receivers coach Jay Norvell reportedly left Texas to take a similar position at Arizona State. Norvell was the playcaller for the bulk of the team for 2015 after Shawn Watson was demoted. When the school hired Sterlin Gilbert in December, it appeared Norvell was not long for the job. Norvell tweeted thanks to Longhorn fans early Friday morning.