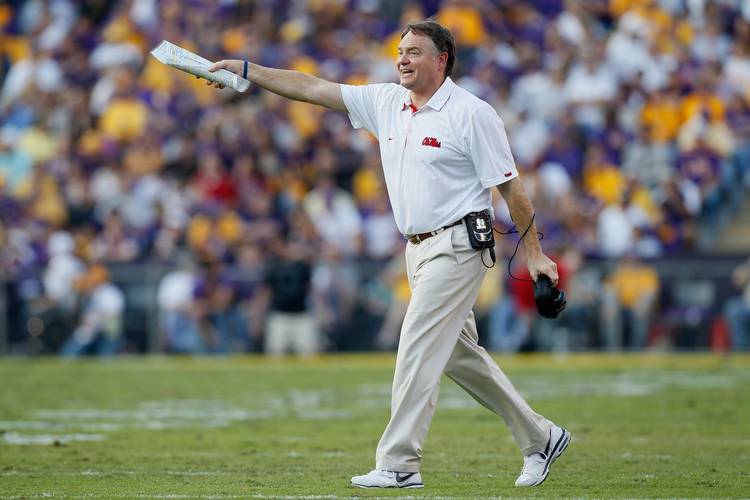 Former Ole Miss coach Houston Nutt praised Chris Vaughn and claimed he was “straight as an arrow” on a SiriusXM podcast. However, Nutt said it was his understanding Charlie Strong made the final decision to fire Vaughn with the Longhorns.

On the podcast, Nutt claimed he’s spoken with Vaughn about his role in NCAA investigation at Ole Miss.

Investigators appear to be focused on what happened in 2010, according to reports. Vaughn was on the Rebels’ staff then. Nutt was Ole Miss’ head coach at the time. Vaughn came to UT prior to the 2014 season. He was summarily fired on Thursday for being implicated.

Texas sources have told the American-Statesman they have no reason to believe Vaughn did anything improper the last two seasons with the Longhorns. “To use this to me, it’s almost like a scapegoat, to me,” Nutt said.

“Let me tell you something about Chris Vaughn,” Nutt said on the podcast. “There’s not one crooked bone in his body. High, high character and that starts at home with mother and daddy. Phenomenal person. What’s a travesty… what is a travesty, you’re going to take away this young man from being around 18-, 19- and 20-year olds? C’mon.

Nutt said Vaughn had “three beautiful children, a tremendous wife and all he wants to do is be a difference maker.”

“I’m disappointed a little bit in Texas,” Nutt said. “You know, you’ve lost eight or nine coaches in a two-year span. Well, again, I don’t know all the facts. I’ve never gotten a letter from the NCAA. Never. So, I don’t know all, but I do know this. I know the character of Chris Vaughn. And Chris Vaughn is a difference-maker, guys.”

Nutt said based on his conversation with Vaughn, the former UT assistant is in the process of finding a lawyer.

Strong issued a statement on Thursday night saying Vaughn was a terrific coach and great person. “However, circumstances have put us in a position that we are going to part ways,” he said.

Texas officials did not make Strong or athletic director Mike Perrin available to reporters on Friday. It’s unclear when UT learned of the allegations against Vaughn or what the allegations even were.

The Longhorns have begun a search for a new defensive backs coach. Strong is also searching for a new running backs and receivers coach.