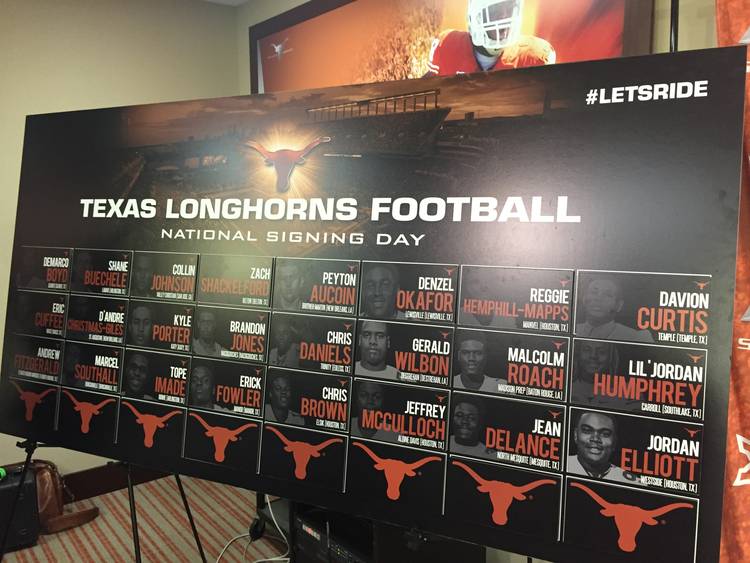 Charlie Strong won’t admit to being too nervous on national signing day. The Texas coach believed in his gut. He truly felt the Longhorns would hit it big on Feb. 3.

“A lot of them (recruits) were just like, ‘Hey coach, on signing day we would like to have our day,’” Strong said. “I said you can have your day as long as you stand up there and put that Texas hat on.”

The Longhorns rocketed up the national class rankings on signing day, reeling in the nation’s 11th-ranked class. The American-Statesman wanted to discover who are these players coming to Austin.

In February and March, the Statesman will profile many of the 2016 signees before they arrive on campus this summer.

Along the way, the Statesman discovered why Katy running back Kyle Porter doesn’t use social media. And why Strong considers Andrew Fitzgerald to be the “dark horse” of this class. And just who is “The Shark?” What’s the real meaning of Lil’Jordan Humphrey’s name? And just how good are Erick Fowler’s mother’s pancakes, anyway?

The Longhorns’ other 20 signees are finishing up their final semesters at various high schools all over Texas and Louisiana. Here’s an interactive map of Texas’ recruiting class of 2016.

The Statesman hopes to retrace the coaching staff’s steps as the group canvassed the countryside searching for new Longhorns. The weather in New Orleans is nice this time of year, anyway.

Watch for updates on Hookem.com as the series unfolds in the coming weeks and all the way through spring practice, which begins March 7. The spring game is April 16 at Royal-Memorial Stadium.

Adrian Colbert will transfer from Texas