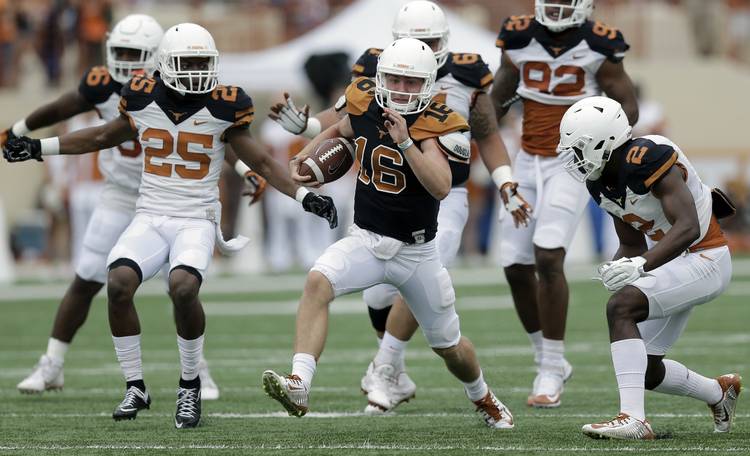 Saturday’s Orange-White spring game provided separation, at last, at a position that has shackled the program since long before Charlie Strong’s first season as coach in 2014.

So now all that’s left for Strong to do between now and September is to head to a podium and announce Shane Buechele as his starting quarterback for the opener against Notre Dame. It would be a refreshing move for the coach, who last year resorted to his default choice, Tyrone Swoopes, when it was apparent Jerrod Heard was not ready to take over. As it turned out, Swoopes was not ready either and relinquished the job to Heard after just one game.

The result was a 5-7 season and a dismissal for quarterbacks coach Shawn Watson.

Entering this spring, Swoopes had a slight edge over Heard and Buechele with redshirt freshmen Kai Locksley and Matthew Merrick lagging behind in a second tier. Buechele, an early-enrollee, ascended to the No. 2 spot when Heard went down with a shoulder injury in late March. That set up a duel with Swoopes in the spring game which went decidedly in favor of Buechele, who threw for 299 yards and two scores compared to Swoopes’ 71 yards without a touchdown.

So Buechele is now the leader. But when will he be named the starter? Below we rank the quarterbacks on the roster.

1. Shane Buechele — Entered the spring as the No. 3 option and 15 practices later stands as the clear-cut favorite to start Sept. 4 against Notre Dame. Strong must now balance the merits between announcing Buechele as his starter prior to the team splitting for the summer and continuing the competition into fall camp. By making the announcement now, Buechele could proceed freely into offseason workouts and command respect from his veteran teammates.

2. Tyrone Swoopes — Has not progressed as a passer since the 2014 season, and there is no evidence that suggests a lightbulb is about to come on for the senior. After losing the starting job last year, Swoopes carved out a niche with the 18-Wheeler and ran for 12 touchdowns. Yet there’s no clamor for more wheelin’, not with the emergence of bruising backs D’Onta Foreman and Chris Warren.

3. Jerrod Heard — Committed a cardinal rule in a competition by getting hurt and was unable to participate in the spring game. Thus, the lasting memory of Heard is the 2015 season in which he regressed and failed to steer the team to a bowl game after his breakout showing against Cal in week three. He’ll be needed at some point next season, but he’s running out of time to reposition himself in the QB battle.

4. Kai Locksley — Didn’t take advantage of Heard’s absence and was left for dead when he didn’t take a single snap in the spring game. Considered a project since day one, Locksley is now a candidate to transfer or to move to wide receiver.

5. Matthew Merrick — Missed the spring game with a back injury. His name is rarely mentioned by coaches when the subject of quarterbacks comes up.

2016 freshmen: Buechele, of Arlington Lamar, was the top quarterback in the state. He committed early and stayed with Texas even after Watson was demoted from offensive coordinator and then dismissed.

2015 review: Swoopes started the first game and the last game, and Heard started all 10 games in between. The results were unflattering, and UT scored 10 or fewer points in three games. Coaches declined to name a starter heading into the offseason, though Swoopes was given first-team snaps to open spring because, according to Strong, he finished the season as starter.