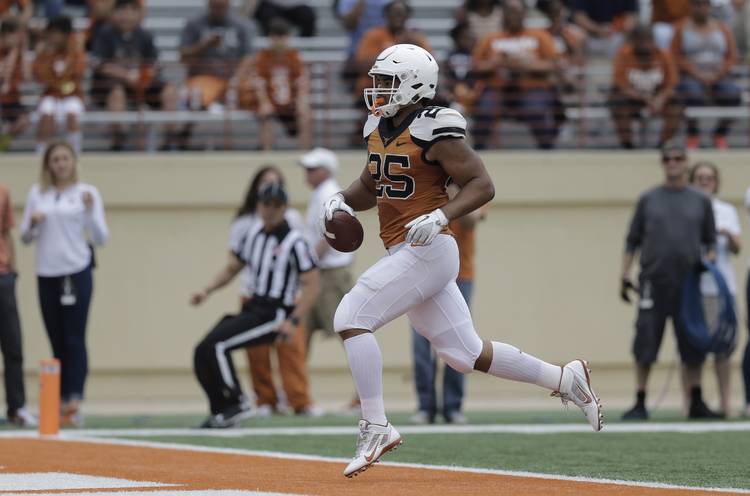 Here’s an odd thought. Texas lost an athlete with 2,607 career rushing yards, and the overall strength at running back will be better this season for the Longhorns.

Johnathan Gray, who averaged 4.5 yards per carry from 2012 to 2015 despite various injuries, has left the building. But that means more carries for D’Onta Foreman and Chris Warren III, a tremendous duo with youth, size and speed.

Probably best to emphasize the word “size.” Foreman is listed at 238 pounds while Warren is a whopping 255.

Those two should get plenty of chances in Sterlin Gilbert’s new up-tempo offense. Gilbert considers himself an Art Briles disciple. That being the case, Baylor is thought to have an all-out aerial attack. Well, the Bears actually led the Big 12 in rushing yards per game three times in the last four years.

“Having a bigger back in an up-tempo offense, if you decide to run the ball two or three times in a row, going that fast, over time, that’s probably going to drain them a lot faster than a normal ground-and-pound game would go,” Warren said. “I feel like it would give us more opportunity to make bigger plays and greatly intensify the play-action.”

Here’s a look at our rank of the team’s current depth at running back.

1. D’Onta Foreman: The former Texas City standout averaged 7.2 yards per carry last season en route to a team-high 681 yards. His 93-yard touchdown run against Kansas was the longest play of last season. Foreman, once told he wasn’t fast enough to excel at this level, also had a 81-yard dash against Oklahoma.

2. Chris Warren III: Soft-spoken but a huge bruiser, Warren averaged 6.6 yards per carry. His 91-yard touchdown dash against Texas Tech was the second-longest play of last season. Fans couldn’t believe it when the spring roster had Warren listed at 255 pounds, but he showed no problems on a 51-yard scoring dash.

3. Kirk Johnson: Granted, one play doesn’t make anybody a superstar. But Johnson’s 32-yard explosive run against Texas Tech was so eye-opening, it’s hard not to envision bigger things ahead. Johnson played in six games overall and finished the season with eight carries for 44 yards.

4. Roderick Bernard: Nicknamed “Hot Rod” by coach Charlie Strong, Bernard has been on special teams for most of his UT career so far. He averaged 19.1 yards on nine kickoff returns as a freshman. Bernard didn’t have any returns as a sophomore as senior Daje Johnson took over the return duties.

5. Tristan Houston: The only reason Houston is fifth on this list is because he redshirted last season and has not seen game action yet. He rushed for more than 1,000 yards as a senior at Galena Park North Shore. But Houston will probably have to fight off incoming freshman Kyle Porter of Katy for playing time this fall.

2016 freshman: Standing just 5-foot-10, Porter led Katy to the Class 6A Division II state title last season and a perfect 16-0 record. He rushed for 1,938 yards and scored 36 touchdowns last season. Porter may be viewed as a change-of-pace back almost immediately.

2015 review: Once defenses learned they should stuff the line of scrimmage, there wasn’t a lot of running room. The Horns tallied 2,698 rushing yards, the most since 2007. But quarterback Jerrod Heard was the team’s second-best rusher with 556 yards. Running is certainly Heard’s speciality, but it’s hard to believe that’s what coaches want long term. UT hasn’t produced a 1,000-yard rusher since that ’07 season. Between Foreman and Warren, one of them might break that barrier soon.