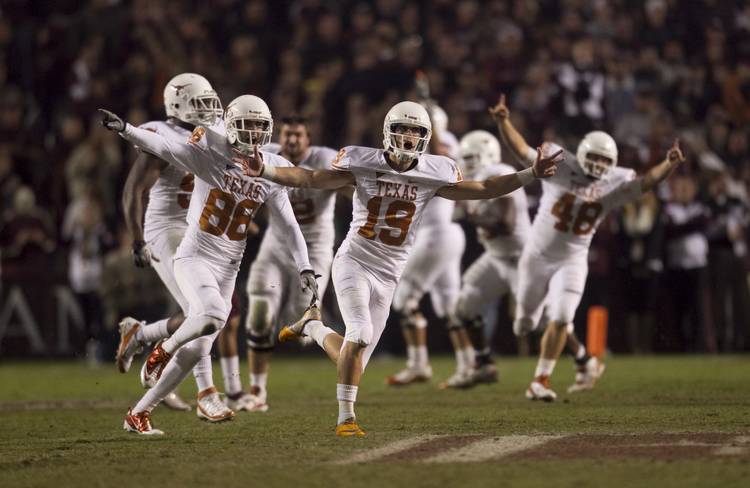 On a future Longhorn-Aggie football game:

“Sadly, in spite of Charlie Strong’s otherwise encouraging words last week, I’m not expecting a Texas-Texas A&M football game any time soon. Texas AD Mike Perrin declined comment. So did A&M’s Scott Woodward, although he told TexAgs, “I’m against doing it at the end of the season (because of the LSU date). I’d like to do it at the beginning of the season. I think that makes more sense from my standpoint. We obviously have obligations with Power Five non-conference games going out a few years. It has to work for (Texas) as well. At the proper time, we’ll have discussions about it.” The absolute soonest could be 2020 unless one buys out a future opponent. Texas, starting in 2020, plays non-conference games against LSU, Arkansas, Ohio State twice and Michigan twice. Texas-Texas A&M would be a guaranteed sellout. A&M has one opening in 2018 and two openings in 2019, and didn’t A&M regent Tony Buzbee say the Aggies needed “some cupcakes?” Many other SEC teams play their rivals as non-conference games — Florida-Florida State, Georgia-Georgia Tech, South Carolina-Clemson — at the end, but I’d love to see an annual Labor Day kickoff between the Longhorns and Aggies.”

“Lance Berkman, 40, threw his name into what’s become a very big hat for the Texas baseball job. I’d still try to money-whip TCU’s Jim Schlossnagle, UCLA’s John Savage or Oklahoma State’s Josh Holliday and keep Dallas Baptist’s Dan Heefner on the back burner. Berkman, the former major-leaguer who hit 366 home runs over 15 seasons, coached Houston Second Baptist to a private-school state championship and openly wants the job. “I have not been contacted by anyone,” Berkman told me. “I’m in my prime. But whoever gets the Texas job has got to win the state of Texas back. Being in the high school ranks, I talk to a lot of coaches and kids, and they’re fired up about A&M, TCU and Texas Tech. You don’t hear anybody talking about Texas. It doesn’t have any momentum right now. You could only recruit the state of Texas and still have a chance to win the national championship every year. The other schools have stolen a little bit of fire from UT.” … I’m told Augie Garrido tried to bring on former Texas Rangers hitting coach Rudy Jaramillo to his staff to be paid out of summer baseball camp money, but the move was nixed because then-AD Steve Patterson couldn’t approve Jaramillo as a volunteer coach because Jaramillo couldn’t be paid out of that pot of money under NCAA compliance rules.

“Longhorns golfer Scottie Scheffler tees it up at the U.S. Open on Thursday on an Oakmont course he’s never played after qualifying in Ohio to continue his torrid play of late. His coach, John Fields, said of Scheffler, it was “an amazing transformation with a 36-hole qualifier for the U.S. Open against an incredible field loaded with tour players. Does the course fit him? I don’t know if Oakmont fits anybody’s game. I think Angel Cabrera won there the last time at plus-5 (over par in 2007). I hear the rough is incredible right now, so thick that if you hit it there, you might not find it.”

For the rest of Kirk’s 9 Things including his thoughts on OU’s athletics department achievements in 2015-16, Drew Brees and intentional fouling in the NBA playoffs, click here.