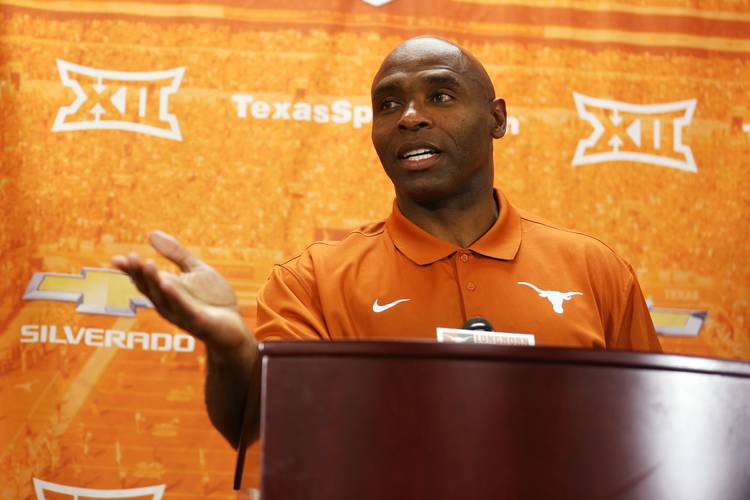 Wednesday was a busy one for Charlie Strong, even if his football team enjoyed an off day from summer workouts.

It began with reports of a major addition — Devin Duvernay, a 4-star slot receiver from Garland Sachse who signed with Baylor in February — is instead heading to Texas, where he’ll enroll for the second session of summer classes. He was the No. 4 overall receiver prospect in the country (and 36th overall nationally) on 247Sports’ composite ratings. Duvernay spoke to ESPN; Texas has not yet made the news official.

Then Strong met with the media, for the first time in a press conference setting since the spring game. He fielded questions on:

Makes sense. There are plenty of things to address on Strong’s plate, including the unknowns of possibly starting a freshman quarterback; reversing a program that’s gone 11-14 in his first two seasons; finding the depth to make on offense to make Sterlin Gilbert’s hurry-up philosophy work; finding the depth on defense to give the front seven a break on the pass-rushing and run-stopping areas; figuring out how to look and play better against the Fighting Irish, who demolished Texas 38-3 in South Bend last September; and incorporating, developing and playing the recruits he’s signed the past two seasons.

Beyond that, not much to worry about.

What Strong said about the satellite camps: “Kids want to be seen, so they come to these camps. I just think we (the NCAA) can do a better job with satellite camps, even if you just limit the number. Really, the good ones that are being recruited, they’re not coming anyway. … You’ve got to find a way to help the student-athletes and help them where they’re not getting worn out.”

On whether Buechele’s being seen as a leader: “The quarterback position is always going to see a leader emerge. Still, Swoopes is doing a good job of working hard. Even Jerrod. In the summer, those guys are around one another. They know who Shane is and how hard he works. All three of those guys are doing a good job. It’s hard to say there’s just one guy stepping forward.”

(Earlier this summer, Strong said, Buechele called him around 10:30 one night because he and fellow freshman Collin Johnson wanted to throw and catch at Royal-Memorial Stadium.)

On whether safeties like Jason Hall and Dylan Haines will be pushed by freshman Brandon Jones: “You want to see that happen. I hope we get that, where guys get pushed.”

On the Notre Dame opener: “It’s big. I know last year we didn’t play well at all. We’re at home, and it’s the opener for us. We need it for our program to go play well. … I told our players that now everybody across the country gets the chance to watch you play. But why would you want it any other way? It’s the University of Texas, and that’s where it should be.”

On where the program needs to be: “It will come. What we have to do is not so much put it on one person. It’s still about building a team the right way. Even if the focus gets on me, I will shift it off and make sure our team knows how important this is.”

On whether a new kicker may emerge: “The guys we ended up with in the spring are our kickers.”

On any impact Charlie Williams is having on receivers: “It’s all about building a relationship with your players. Charlie’s old-school. He knows how to push that button, communicate. You want players to go compete at their best.”

On depth, and the choice between playing a lot of players vs. playing the best players: “We always talk about players getting worn down, playing a lot of plays. You’re going to have to play a lot of players just to keep players fresh. If they practiced, now you’ve got to give them the opportunity to play. It builds within your team, now they start feeling good about themselves. The worst you can do is have a lot of players on the sideline, feeling upset. Let them go out there and compete, give our guys a chance to rest up.”

On Kris Boyd: “You’d like to see Kris, he sat there last year with Davante (Davis), he competed well. He was an unbelievable special teams player. He’s working right now. He’s going to be given that opportunity.”

Strong also said Boyd will play outside cornerback, not the nickel spot.

On whether Swoopes’ 18 Wheeler package is still in play: “You want me to tell Notre Dame what we’re doing?” There was laughter. “Tyrone still has that package. All the quarterbacks can do different thing. You can always get that worked out. I think Sterlin’s smart enough to do that.”

And on whether incoming freshman Andrew Fitzgerald (6-5, 250) can grow into a defensive tackle: “He’s at end right now. It just depends on his body. He’s sitting probably at 250, 255, which is a good size. What he really does is he kicks off (the line) and goes hard; you don’t want him to lose that edge about him.”