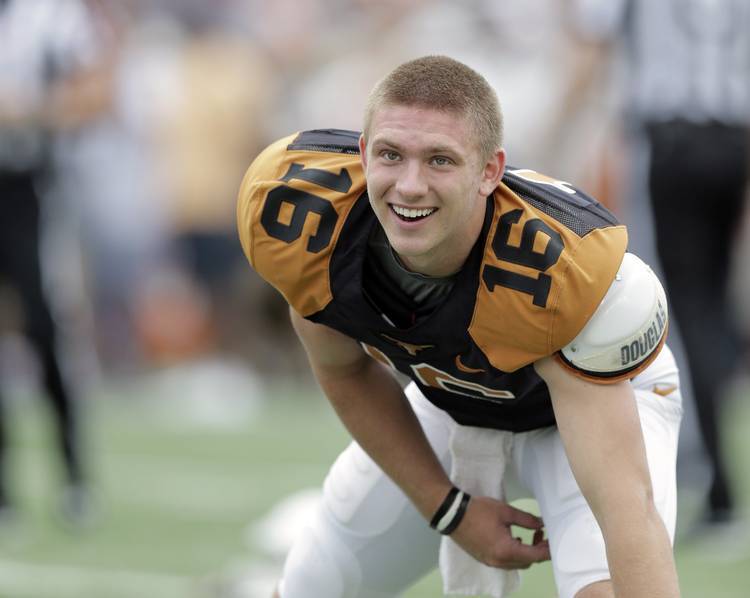 Charlie Strong should just dispense with the drama and name Shane Buechele the starting quarterback for the opener against Notre Dame now.

Go ahead and get it out of the way, Chuck. Boo, Jr. is your best option. Now will he play as well when live bullets are flying against a national title contender in a stadium packed with 100,000-plus on a special Sunday night edition of ABC College Football?

Remains to be seen.

Buechele has outplayed the more experienced Tyrone Swoopes and Jerrod Heard in the practices the media was allowed to attend . He has some nice zip on the ball, throws a decent out route and knows how scramble a little when chased from the pocket. Swoopes performed better in the stadium Sunday than he did at Denius Fields but not enough to make me believe Strong would name him the starter for the second straight season.

Buechele, on the other hand, has already earned a degree of respect in the locker room and on the practice field. Strong couldn’t stop gushing about him at Big 12 Media Days, describing him as a guy who competes in everything. Texas needs that kind of confidence behind center, even if it will be a true freshman calling the signals. Buechele carries himself like an older player. We’ll see if he plays that way.

Consider me shocked that Heard didn’t show more. He took far fewer reps than the other two and did not show an improvement in accuracy from the last time I saw him play. Yes, the feet are still nifty which might mean he could serve as a change-of-pace option if the other two struggle. Heard is the best athlete of the three but Buechele appears to be the best quarterback.

With that said, there will come a time this season when the Longhorns will need Jerrod Heard. I just hope he stays mentally engaged in what looks to be a third-string role.