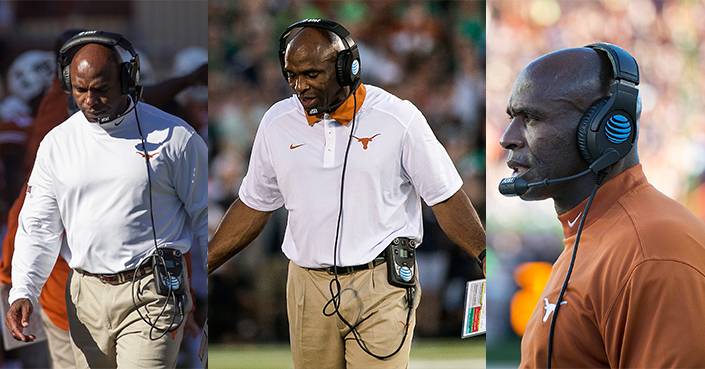 Superstition and sports have always gone hand in hand. For some fans, sitting in a special chair or wearing a specific jersey is their way to contribute to a team’s win. For Texas coach Charlie Strong, it may be a burnt orange turtleneck.

Call it just plain luck or coincidence, but even the greatest athletes are not above superstition. Michael Jordan famously wore his basketball shorts from his playing days at the University of North Carolina under his Chicago Bulls uniform every game.

Despite the Texas heat, Strong just can’t get enough of wearing long-sleeve, sweat-wicking, mock turtle shirts. Back in 2014, Strong told reporters he was ditching white in favor of burnt orange on game days. In Strong’s 27 games as head coach, the Longhorns have won 13 times. Take a look at his record for each of his game day getups.

White polo with burnt orange collar
Win-loss record: 0-1
This is a good place to start because Strong didn’t wear a polo during a game until his second season opener with Texas. The score is a good indicator of why it may be the only time he worn a polo on the sideline. Texas was crushed by No. 11 Notre Dame 38-3.

Burnt orange rain jacket
Win-loss record: 1-0
Rain clouds parked over the city and made themselves quite comfortable the day of the 2015 Texas-Kansas State game. A quick perusing of our Statesman photos didn’t reveal whether he wore a turtleneck underneath, but Texas soaked up a 23-9 win over the Wildcats.

White mock turtle shirt
Win-loss record: 3-8
The first time Texas played with Strong at the helm, the new coach broke out the white, long-sleeved turtle-necked shirt. The Horns won that game against North Texas. Strong repeated the look when Texas beat Kansas a month later. But it took nearly another year before the team won with Strong in white.

Orange mock turtle shirt
Win-loss record: 9-5
The burnt orange mock turtle shirt is the overwhelming best pick for Strong to reach for when getting ready for a game. Strong joked about wearing the burnt orange shirt for the first time to get a win after Texas beat Iowa State 48-45. During his first season at Texas, the burnt orange shirt had a 4-0 record leading up to the home game against then-No. 4 Texas Christian. However, photos within our archive revealed Strong warmed up his team while wearing the white version of the shirt before changing. Texas ended up losing the game 48-10. Had the curse of the white turtleneck come back to haunt Texas? Maybe.

The orange shirt made a surprisingly subdued appearance during the final game of the 2015 season when Strong opted to wear a gray sweatshirt over it. The Longhorns beat No. 12 Baylor 23-17.

So far this season, Strong appears committed to the orange turtleneck. Perhaps the coach started to view it as a recipe for success. He worked out players while wearing burnt orange polos before both home games then switched into his now-signature look for impressive wins over Notre Dame and UT-El Paso.

The key to a Texas win this season might be as simple as a burnt orange mock turtle shirt. Or Shane Buechele. But what would be the fun in that?