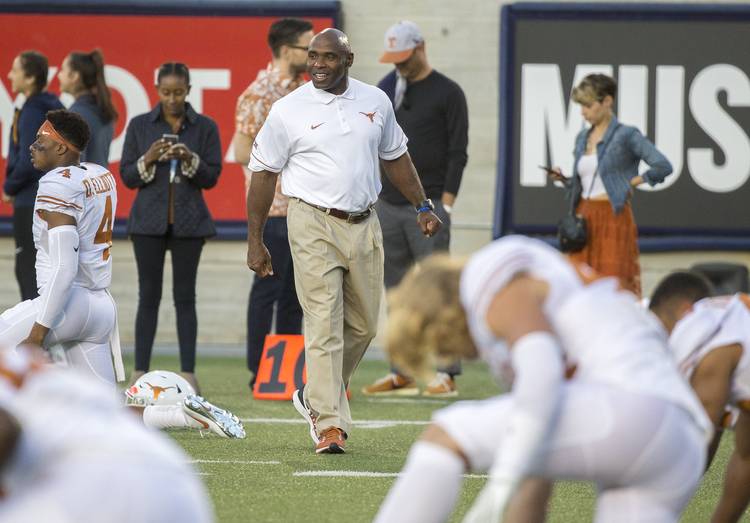 In today’s Golden’s Nuggets, Cedric touches on a big Bevo-related item: What to do about the Texas defense? Here’s what he had to say about it:

The gravity of the moment demands it.

Strong was one of the three best assistant coaches in the country when he was Florida’s defensive coordinator. The 2008 national championship team had the most interceptions in college football (26) while allowing only 12.9 points per game, which ranked fourth in the nation. In his seven seasons in Gainesville, the Gators allowed just 17.6 points per game, which is nearly half of what his 2016 Longhorns are allowing.

The Longhorns are who they are at this moment, a talented offensive team with all kinds of defensive problems.

Defensive coordinator Vance Bedford played in this secondary as a player, and coached defensive backs in both the NFL and college, but somehow isn’t getting the production required for Texas to make any real noise in its upcoming Big 12 slate.

Strong said he sits in on the defensive meetings and does a lot of listening. But that has to change. As a defensive coach by trade, he has to be livid with the product Texas put on the field at Berkeley. It was similar to the one we saw against Notre Dame in the opener, the difference being Texas got out of that one with a double-overtime win.

While he does have the option of moving linebackers coach Brian Jean-Mary into the lead chairs, Strong would be much smarter to take on the role himself. It’s not just Bedford’s neck on the line. It’s his own as well. Even if he promotes Jean-Mary, Strong should be Texas’ defacto defensive coordinator.

There’s nothing funny about a team this talented being caught out of position time and time again while Cal’s receivers exploited gaping holes in the secondary of experienced football players.

Which the exception of Texas Tech and Kansas, which are ranked 105th and 120th respectively against the rush, the Horns aren’t going up against too many Big 12 teams that will be so easy to run against, which means the onus will be on the offense to continue to carry the load.

Since the offense is in good hands Strong should devote 100 percent of his time to getting this fixed. It needs his full, undivided attention.

For the rest of Cedric’s Nuggets, including his take on Dak Prescott and Tony Romo, click here.