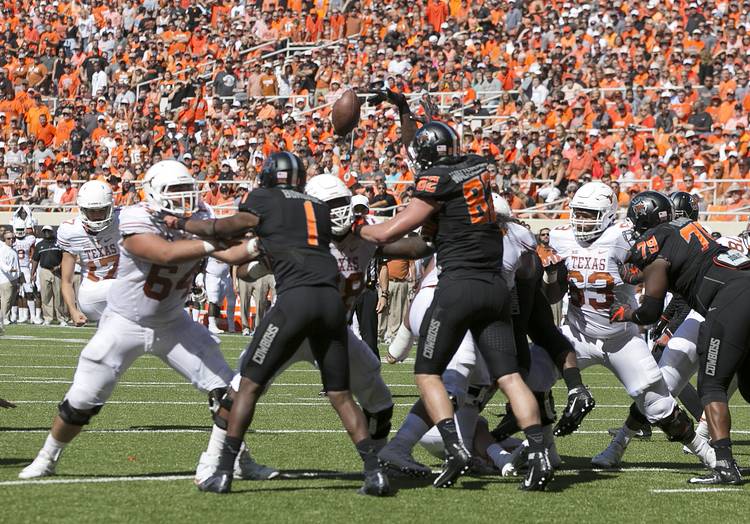 The struggles from Cal have followed Texas to Stillwater with some new wrinkles attached. The Horns don’t look any better on defense, despite having had a bye week to prepare for a familiar opponent.
Here are a few Nuggets from the first half.

When did blocked extra points become a thing?

Somewhere along the line, the Horns are going to have to block whatever defensive tackle is busting through the line to block extra points. Three of Trent Domingue’s extra-point attempts kicks were rejected and the Cowboys turned one into two points the other way.
That’s four for the season, including the one in the opener against Notre Dame.
Looking ahead, don’t be shocked to see Strong dispense with the shambled kicking game and go for two if/when the Horns score a touchdown.

Two weeks after the California debacle, coach Charlie Strong appears to be taking more of an active role in the defensive game plan. At several points of the first half, it appeared he his signaling in plays through assistant Brian Jean-Mary. Vance Bedford is still active on the sideline as well thought it’s not entirely clear if the boss is calling the plays.
One thing is clear: he is as animated when Texas is on defense as I have seen him since he got here.
Either way, it’s not working.
Too many missed tackles and not enough defense to stop this Cowboys offense.

The Horns are a Pac-12 team

Texas is playing like it was one of those West Coast late night Pac-12 scorefests that go down to the last snap. Texas has a very good offense and the running backs and Shane Buechele are playing well but the defense is of little to no help. Speaking of running backs, Chris Warren won’t be back for the second half after injuring his knee on a long run in the second quarter. He had 106 yards.

Case in point. Defensive tackle Charles Omenihu sacked Mason Rudolph near the end of the first half and Strong called a timeout, presumably with hopes of getting the ball back. Three plays later, Jalen McCleskey is racing downfield with a 52-yard TD catch.

Want statistical evidence that the Horns are playing Pac-12 ball? They had a great offensive half with 390 yards and 25 points but gave up 390 yards and 35 points to the other offense (not counting the two points scored by the OSU special teams).