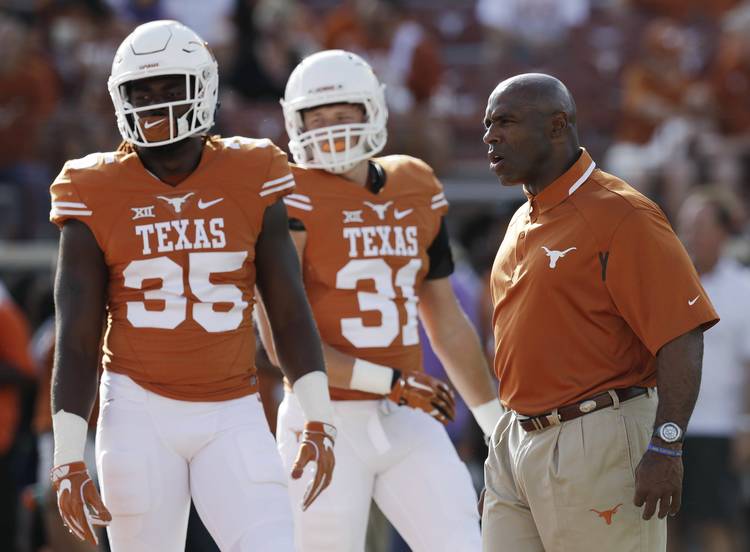 In today’s Golden’s Nuggets, Cedric touches on the big Bevo-related item: By replacing Vance Bedford as defensive play-caller, what’s next for Charlie Strong? Here’s what he had to say about it:

Charlie Strong had no choice.

Not if he wanted to save this season.

I wrote weeks ago that the time had come for Strong for take over play-calling duties for this underachieving defense and he finally made it official Monday. Vance Bedford is now a position coach.

“Just feeling like right now, I just need to be calling the defense,” he said.

Question is, what took so long?

Strong should have made the call on the plane back from Berkeley after giving up what should have been 57 points to Cal. The Longhorns had been undressed by a one-dimensional offenses for the second time in three weeks and the defense could have used the two weeks to become more accustomed to his increased role in the meeting room.

Instead, he gave Bedford another week to make progress and progress didn’t happen.

Now with the high-scoring Oklahoma Sooners next on the schedule, Strong will have to wear two hats at the Cotton Bowl.

On the bright side, a second hat worked quite well for him this time last year after the Horns knocked off the 10th-ranked Sooners in Dallas.

Texas will go in there as a touchdown underdog, but Strong believes the Horns are even match with OU talent wise. I agree. There’s a question of which talented team’s players will show up at the Cotton Bowl.

Let’s call this what it is: a swing game for the head coach/new defensive coordinator.

For the rest of Cedric’s Nuggets, including his thoughts on the upcoming game with Oklahoma, Mack Brown leaving the broadcast booth early on Saturday and Ezekiel Elliott, click here.