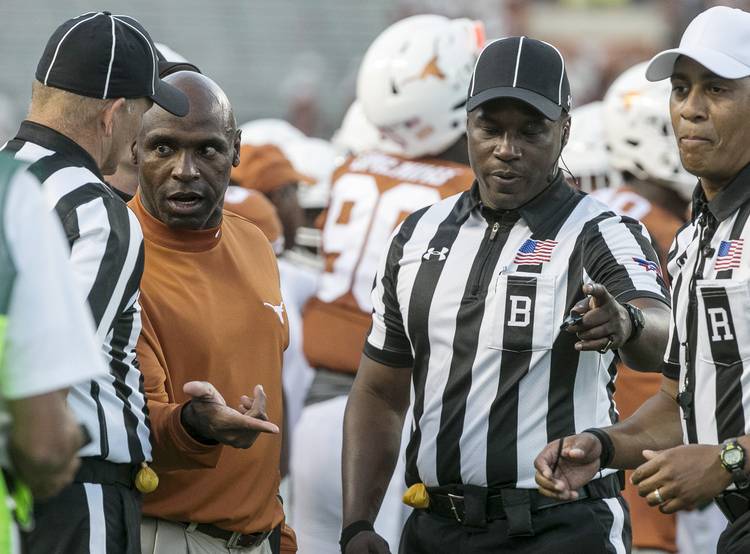 September 10, 2016 - Texas head coach Charlie Strong talks with officials as a play is being reviewed during the second quarter of action held at Royal-Memorial Stadium in Austin, Texas, on Saturday, Sept. 10, 2016. RODOLFO GONZALEZ / AUSTIN AMERICAN-STATESMAN)

Bob Stoops declined to talk in any detail about the mounting pressure on Texas football coach Charlie Strong, but did offer a degree of support on Tuesday. Asked if he was surprised it’s taken so long for Strong to get Texas back on track, the Oklahoma coach told me, “I don’t have any comment about anything other than our team. But I think Charlie is an excellent coach. I’ve known him for a long time, and he’s got a great track record.”

On complications of any school hiring Houston’s Tom Herman:

One thing that could complicate Texas or any other school interested in hiring Tom Herman: Should he lead Houston to the College Football Playoff national title game, all suitors would have to wait. I can’t imagine Herman forfeiting a shot at the ring by taking another job beforehand, and the Cougars might not look kindly on his taking another job and wanting to stay on through the playoffs. Also, Texas has no plans to replace Mike Perrin until 2017, which could muddy the works because coaches like to know who their bosses are going to be. Get on it, Gregory L. Fenves.

On his food of choice at the Texas State Fair this weekend:

Have to admit I have my eyes on the deep fried clam chowda, part of the new menu at the State Fair of Texas this weekend although I’d need permission from my wife and my cardiologist. Better off trying the deep fried cannoli bites. The deep fried bacon-wrapped tot dog? Not a chance. But a Fletcher’s corny dog is a must.

For the rest of Kirk’s 9 Things, including his thoughts on his FBS coach of the year so far, the Dallas Cowboys and the Texas Rangers’ postseason chances this year, click here.

Texas RB Chris Warren could be lost for the season