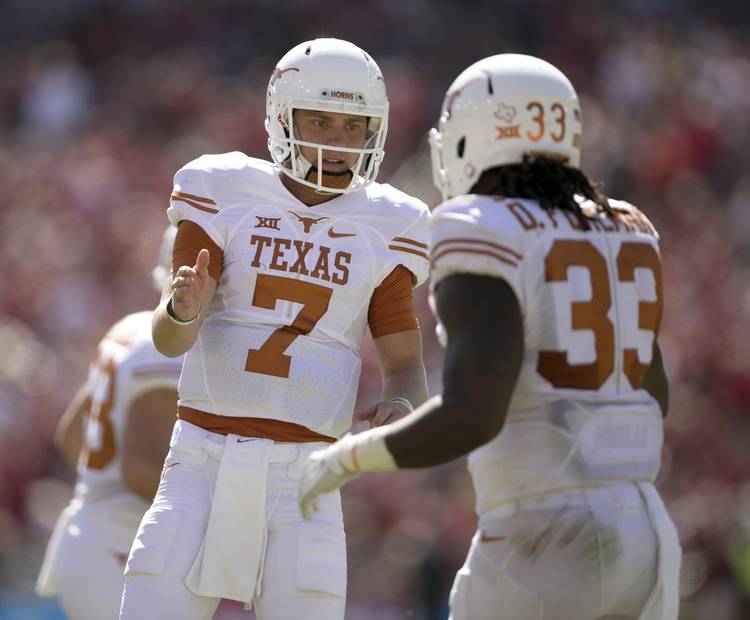 UT quarterback Shane Buechele (7) congratulates running back D’Onta Foreman on his touchdown run in the second quarter against OU at the Cotton Bowl in Dallas Saturday October 8, 2016. JAY JANNER / AMERICAN-STATESMAN

DALLAS — The biggest news coming out of the Cotton Bowl is a Texas defense that gave up only 14 points in the first half to the Oklahoma Sooners.

OU 14, UT 13.
That’s a far cry from the 37 Oklahoma State handed them in Stillwater last week.
Congrats to new defensive coordinator Charlie Strong.
The Horns are in this one for sure, playing inspired ball against an Oklahoma team that was favored by upwards of 14 points coming in.
A few thoughts:

OU quarterback Baker Mayfield looked way off on some routine throws in the early going but put all of that talk to rest when he it DeDe Westbrook with a 71-yard TD pass in the second quarter. The Longhorns were bend-but-don’t-break up until then. It was really the only major gaffe in the first.
Strong will certainly take that, especially  with that season-high three takeaways for a team that came in with only one for the year, which was the worst among Power 5 schools.

He is likely still battling the effects of that abdominal injury at Stillwater but Sooner killer  D’Onta Foreman still managed 32 yards on 12 carries and Texas’ only touchdown. Foreman had one of his best games last year with 115 yards against the Sooners but he doesn’t seem to have the same burst today.
Texas definitely misses its other hammer Chris Warren III though freshman Kyle Porter has been OK in a supporting role. Most important is he has held on to the ball. Foreman did lose a fumble.

Can they get it done?

They can if the offense wakes up after that 130-yard half. QB Shane Buechele missed John Burt on what have been a long touchdown that would have put the Horns  up17-7 assuming they would have made the extra point. The Sooners have gotten to him a few times and prevented those deep routes from developing.
On the other side of the ball, OU cornerback Jordan Thomas is an NFL player in the making. He’s been terrific in one-and-one coverage.
The Horns are right there but the offense has struggled in the second halves of the last two two games with only 16 points in the last four quarters.
We’ll see if they hand the Sooners a second straight loss in the rivalry and get some momentum going for their head coach.