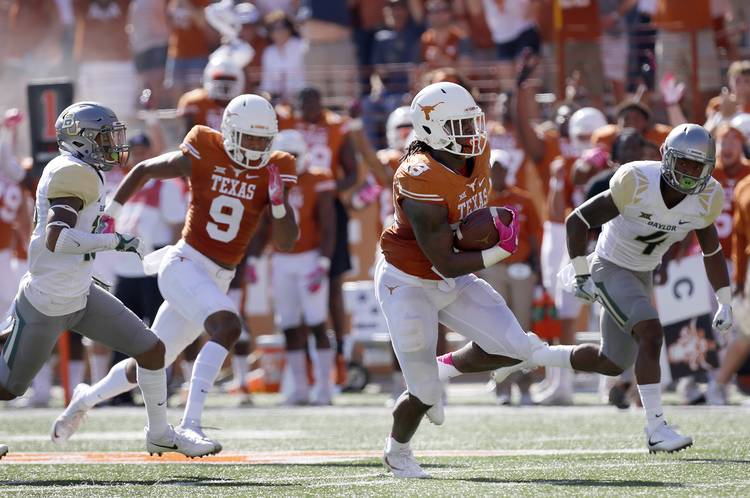 Texas is up 23-21 at the half in a game that’s sorely needed to get the heat off their embattled head coach Charlie Strong.

After giving up Seth Russell’s long touchdown run in the first minutes, the Texas Longhorns are playing some inspired defense. Why can’t they bring this type of effort on the road? I guess that’s for another discussion. Anyway, on to the matter at hand.
Aft first it looked as if punters Michael Dickson and Drew Galitz were going to get the day off but the defenses decided to show up and show up they did with a combined three takeaways.

After a shaky start — two touchdowns in about two minutes —  the Texas  defense is getting the job done so far against the nation’s fourth-ranked offense.
P.J. Locke has picked off Seth Russell and the defense got a safety when Paul Boyette, Jr. aka PB&J, was held in the end zone.

Texas gave up its share of big plays but the vital statistics on the scoreboard are the ones that matter. Based on what we witnessed in Manhattan, this was an excellent defensive half of football.

Why did Charlie Strong bench Malik?

Malik Jefferson has not played well this season one year after being named a Freshman All-America. So it wasn’t a huge surprise that he didn’t start today, especially after he was benched for parts of the loss at Kansas State.
I understand a demotion based on production but why was Jefferson back in there for the second half? Not exactly a strong message if he was being sat for not playing well.Also on the demotion beat: guard Patrick Vahe did not play in the first half.

Another game, another 100 yards. Foreman has 128 yards rushing and a pair of touchdowns. Expect him to carry the ball 20 times in the second half as long as the Horns keep it close. He’s the ultimate equalizer.

Russell hit Ishmael Zamora with a 20-yard touchdown to tie it at 14 but it appeared that Zamora pushed off on the play in clear view of the refs. Judge for yourself.

In case you somehow weren’t sure, Zamora pushed off. pic.twitter.com/7gy7UQkerP

Football games aren’t won in two quarters but the Horns gave Baylor all they could handle in the first half. We’ll see if Texas can keep up this momentum. Expect a steady dose of Foreman in the third quarter but Shane Buechele will have to make some plays downfield to make this upset happen. Devin Duvernay and Armanti Foreman: are you listening? Plus the defense will have to play as well, or even better, than it did in the first half. The upset is on the table.