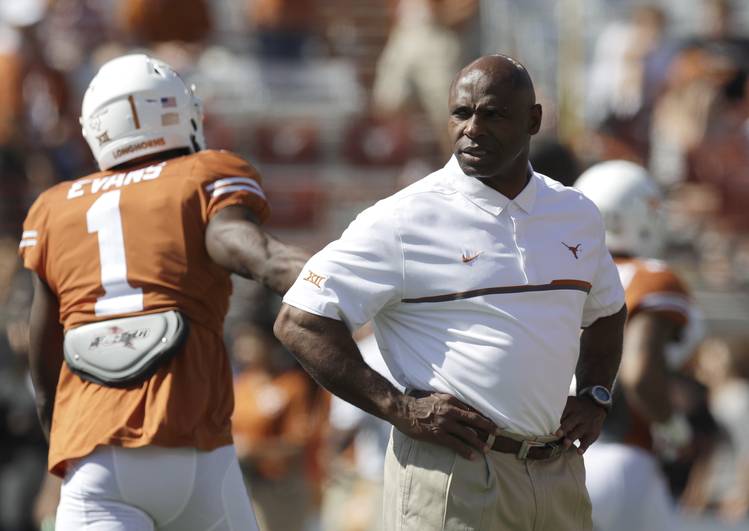 On Charlie Strong’s job status after Texas’ win over Baylor:

Charlie Strong isn’t safe. Charlie Strong isn’t out. The die has not been cast. Texas’ upset of No. 8 and unbeaten Baylor gives the third-year head coach a reprieve for now and alters the trending narrative that no progress has been made. Beating a second Top 10 team this season definitely represents progress even if Texas also beat No. 10 Oklahoma and No. 12 Baylor a year ago and didn’t even make a bowl game. If Trent Domingue’s last-minute field goal sails wide, Strong would be sitting at 3-5 now and might well be done. That’s how close the margin of Strong’s job security is. He needs three wins and improved defensive showings. “It is still numbers-based,” a Texas school official said Tuesday. “Win out and he stays. (Go) 6-6, he probably gets canned. And 7-5 could go either way.” It’s all out there for Strong because the Big 12 is a bad conference and all four of Texas’ remaining games are winnable. Even four wins in the last five games would put the Longhorns in a better bowl and could punch Strong’s return ticket for 2017.

On the Horns’ men’s hoops chances this year:

Shaka Smart’s basketball guys open the season with an exhibition Wednesday night, and the success they’ll have this year could largely be dictated by the emergence of a reasonable facsimile of a point guard. Asked how Texas will replace the departed Isaiah Taylor, Smart said, “We have to play that position by committee. We don’t have someone on our team (who is set at the position). In fact, I know we don’t have someone who has played that position exclusively. We have next to no one who has played that position at the college level at all.” True freshman Andrew Jones and sophomore Kerwin Roach will likely share the position unless one takes hold, and Roach will probably be the starter. “We have some play-making guards who can learn to be very good decision-makers, but it’s going to take some time,” Smart said. “Andrew is learning to play that position, and he and Roach and Eric Davis, they have to be somewhat interchangeable.”

On where the tight ends’ production has been this year:

There was a sighting of a tight end in the Texas offense, and that’s a good thing. Andrew Beck, who has good hands, caught two balls, including one for a touchdown, against Baylor to give him three catches all season. Caleb Bluiett is without a reception. I’ve been mystified by the lack of tight end targets in Sterlin Gilbert’s offense as well as the lack of a single trick play. Texas’ tight ends are a selfless lot. … Would still prefer seeing Jerrod Heard in the wildcat more than Tyrone Swoopes in the 18-Wheeler package. Heard may not relish contact, but he sure seems able to avoid it. He’s caught four balls in the last four games.

For the rest of Kirk’s 9 Things, including his thoughts on the Longhorn baseball team’s progression this fall, Big 12 referees and the MVPs of the NFL so far, click here.