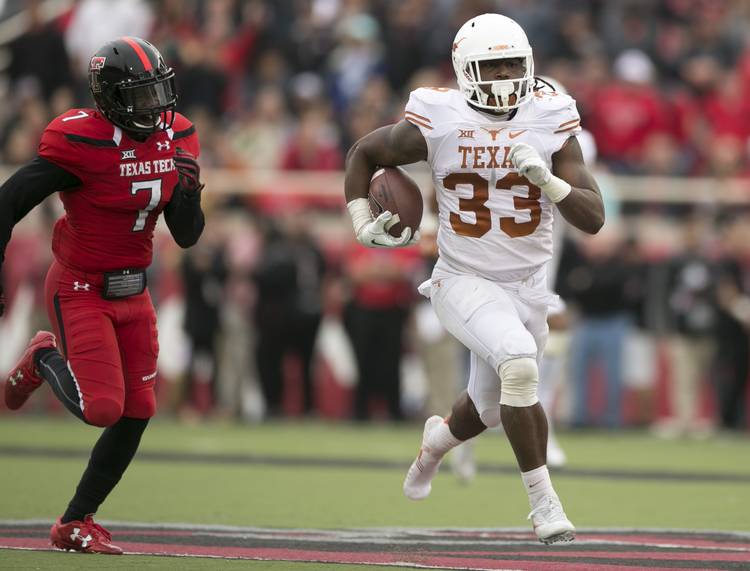 In today’s Golden’s Nuggets, Cedric touches on a couple big Bevo-related items: Here’s what he had to say about the coaching staff sitting D’Onta Foreman at critical times in the game versus Texas Tech:

Charlie Strong didn’t like the line of questioning Monday regarding the polarizing 18-Wheeler package.

He passionately defended its use and went out of his way to compliment Longhorns offensive coordinator Sterlin Gilbert, who holds the keys to the Rolls Royce that is the nation’s 14th-ranked offense.

More to the point, Strong explained how he could conceivably sit D’Onta Foreman, who was playing the game of his life, at the most important juncture of the game for the second straight week.

“Charlie, a point can be made that you and Sterlin were the only two people in the stadium that stopped D’Onta by not playing him,” I said to him.

Point taken — if a bit off point — but here’s my problem with the 18-Wheeler: Of Texas’ seven offensive plays that preceded Shane Buechele’s kneel-down to end the game, Foreman touched the ball just twice, despite already having run for 333 yards. On the other five plays, the Horns netted a single yard as a result of a pair of incomplete passes, a Shane Buechele run and two carries by Tyrone Swoopes.

Swoopes’ carries came at Foreman’s expense because he was unstoppable Saturday, as he has been for most of the season. He had 33 carries on the day, and none went for a loss. Strong and Gilbert actually kept Tech in the game by not playing their best player. This isn’t a criticism of Swoopes, who is a super kid, but of the people calling the plays. Bum Phillips didn’t sit Earl Campbell on fourth-and-1, and Foreman is Charlie Strong’s Earl Campbell.

Let’s hope that if the Horns need one yard to clinch a victory over West Virginia, Foreman isn’t watching from the sideline with the rest of us. That kind of thinking can get the Longhorns beat.

For the rest of Cedric’s Nuggets, including his thoughts on Malik Jefferson, Art Briles apologists and the Dallas Cowboys’ win over the Browns Sunday, click here.