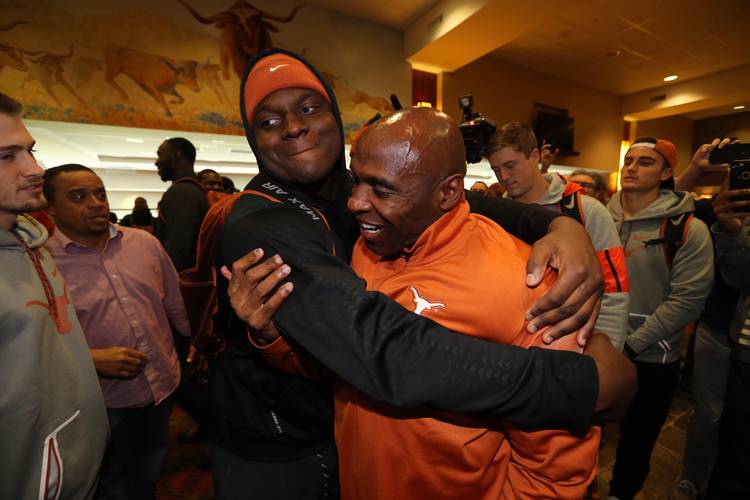 All the proof you need was Monday’s outpouring of support at his emotional weekly presser.

Here’s the problem: that love off the field didn’t translate to enough wins on the field. You can’t lose at Kansas, especially when you went up there armed with the knowledge that an upset loss to the worst team in America would be a deal breaker for your head coach.

It was all set up on a platter. Just beat the worst program in America and the odds of him returning for 2017 rise exponentially. The Horns and lost in train-wreck fashion and Strong is left to deal with the reality that he’s probably out of a job.

The statement made via email by athletic director Mike Perrin Sunday night did more harm than good if the plan is to relieve Strong of duty. What the administration has done with its mishandling of this situation is made Charlie Strong a martyr. If he’s gone, let him go. Don’t tug at the emotions of the people personally involved. That said, you can’t help but notice the  sympathy he is receiving from his players, Texas fans and even colleagues though the vital math says he is statistically the least productive coach in school history.

Want to hear a sobering truth? Had Charlie beaten Iowa State in 2015 and Kansas last week, we wouldn’t be having these conversations. Those are the two worst teams in the Big 12 year in and year out. At the very least, the argument could be made that he would be 18-18 (not counting the bowl Texas would have played in) instead of 16-20 had he won those games.

The reality hits home after the fact. I really believed Strong could have taken a large step forward with this program had he finished 7-5 this season and won a bowl game but then Kansas happened. With all due respect to players like Paul Boyette, Jr. who tearfully voiced his support for Strong to reporters Monday, he was brought in here to win, first and foremost.

“I think I gave him all I had,” Boyette said.

Knowing Paul the way I do, I know he did.  I love what he has done to make these young men better citizens but they pay him $5.2 million a year to win ballgames. It’s a cruel business he’s chosen for himself but a lucrative one as well.

That big money comes with a huge set of expectations.

WATCH: Texas football players on Charlie Strong’s future: ‘We want him to stay’

Charlie Strong on LHN: ‘We deserve to come back’