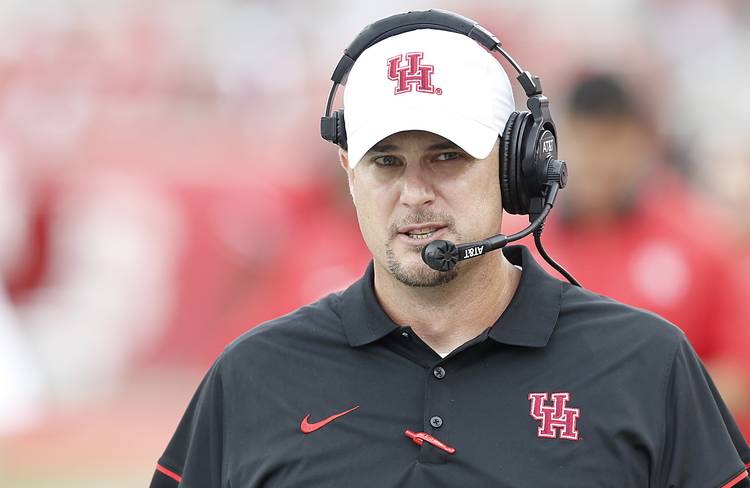 Houston Cougars head coach Tom Herman walks the sidelines as he coaches against the Lamar Cardinals in the second quarter at TDECU Stadium on September 10, 2016 in Houston, Texas. Houston won 42 to 0. (Photo by Thomas B. Shea/Getty Images)

If Charlie Strong is gone, who will be next head coach:

If Strong is gone, school president Gregory L. Fenves and athletic director Mike Perrin should make Nick Saban, Urban Meyer, Dabo Swinney and Chris Petersen tell them no. If they do say no — and I assume they would — the list should start with Houston’s Tom Herman. Those who doubt his credentials because of his loss to lowly SMU should remember that not only has he beaten Florida State, Oklahoma and Louisville twice, he’s trounced them. I’d consider Herman a 60-40 favorite to get the job although he has not been contacted and will be high in line for possible openings at Oregon and either LSU or Florida State. Other prime Texas candidates could be Jimbo Fisher, Kyle Shanahan, Larry Fedora, Kyle Whittingham, Bryan Harsin, Justin Fuente, P.J. Fleck and maybe even SMU’s Chad Morris, who is 7-17. Chip Kelly has said he wants to stay in the NFL with the 49ers and had an embarrassing show-cause NCAA letter for Oregon violations, and I doubt either Jim or John Harbaugh would be interested in the job. Maybe Texas would again look at James Franklin, who has clearly turned around Penn State in three years.

On 2017 UT commit QB Sam Ehlinger’s status with the Longhorns:

Longhorns fans, want some good news? Sam Ehlinger tells me he’s still planning to sign with Texas and enroll in January, no matter what happens to Charlie Strong. The Westlake quarterback, the school’s all-time passing leader who led the Chaparrals to a second-round playoff win over Converse Judson after sitting out most of the season with a fractured thumb and knee surgery, said he’s “planning on it either way.” So your commitment to the Longhorns is firm? “Correct,” Ehlinger said.

Strong’s prediction of a national championship for Texas soon rings hollow when his team is 5-6 and can’t beat Kansas. I do think the roster is improving, but that hasn’t translated to wins. Two-time consensus All-American defensive back Johnnie Johnson, who was at Monday’s press conference and whose sons Collin and Kirk are current players, said he backs Strong and thinks “there’s a high probability this man will be back in 2017. You can’t cheat maturity. You can’t rush it. You’ve got to take your lumps first. Whoever is coaching here in 2017, we’re going to look like Michigan and Colorado and Penn State. Texas will be in the hunt for it all.”

For the rest of Kirk’s 9 Things, including his thoughts on Armanti Foreman, D’Onta Foreman and Baylor’s coaching search, click here.

Longhorns in the NFL: Week 11