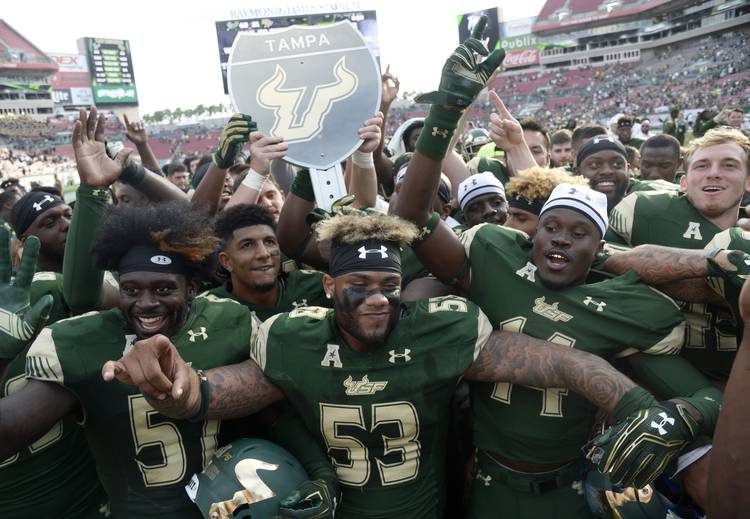 The South Florida Bulls celebrate their win over the UCF Knights at Raymond James Stadium on November 26, 2016 in Tampa, Florida. (Photo by Jason Behnken / Getty Images)

Today’s team: No. 18 South Florida (Related coverage: USF’s Quinton Flowers has gained a lot from his friendship with Teddy Bridgewater)

Best-case scenario: Charlie Strong proves it just wasn’t a good fit at Texas. With plenty of talent remaining from a team that finished 19th in the final AP poll, Strong has a chance to find Louisville-like success at his new job.

Worst-case scenario: What cursed Strong at Texas also hexes him at South Florida. The Bulls recorded double-digit wins for the first time in school history last year, but a few slip-ups may remind fans of the team’s 14-34 record from 2011-14.

The key game: Sept. 21, Temple. The two best teams in the American Athletic Conference’s East division last year, South Florida and Temple both saw their coaches leave in the off-season. (Ex-Temple coach Matt Rhule is now at Baylor). South Florida will prepare for the showdown with games against San Jose State, Stony Brook, UConn and Illinois, four teams that went a combined 15-32 in 2016.

Spring cleaning: Three Bulls — Mack (Colts), receiver Rodney Adams (Vikings) and center Kofi Amichia (Packers) — were drafted this spring. … USF’s 2017 recruiting class checked in at No. 76 on 247Sports’ composite ranking. The Bulls were 66th in 2016. … Elijah Mack led South Florida with his 60 rushing yards in the team’s spring game. He is not related to Marlon Mack, the school’s all-time leading rusher.

No. 17: Coming Thursday. Want a hint? This school’s marching band is known as the Pride of the Sunshine.