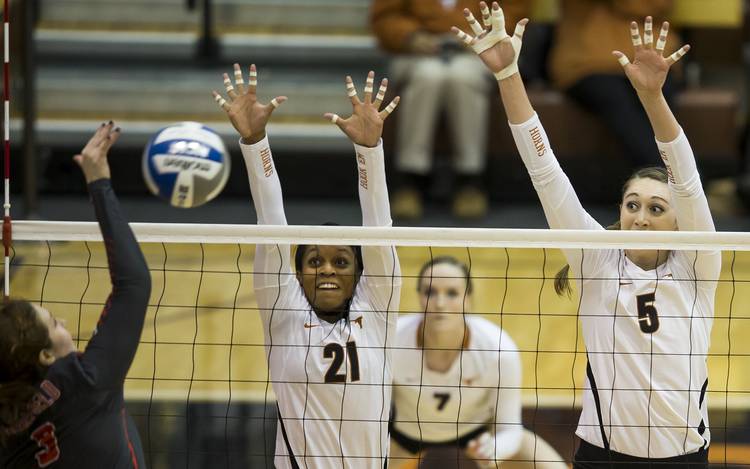 Texas's 21 Chloe Collins and 5 Molly McCage tries to block the ball from Fairfield Stags' 3 Skyler Day during the first half of an NCAA first and second Round women's Volleyball basketball game at Gregory Gymnasium in Austin, Tex., Thursday, Dec. 3, 2015. RICARDO B. BRAZZIELL/AMERICAN-STATESMAN

The Texas volleyball team will be without two key players for its Big 12 opener at West Virginia on Tuesday evening.

Texas announced that senior setter Chloe Collins won’t play on Tuesday because of an illness. Meanwhile, freshman Autumn Rounsaville, a libero from Dripping Springs, will be sidelined by an undisclosed injury. Both players will be reevaluated on a day-to-day basis.

Collins is averaging 11.29 assists per set this season, and she currently ranks third in the Big 12 in that statistical category. Senior Nicole Dalton and freshman Riley Fisbeck are the only other setters on Texas’ roster, although Dalton has been used in a different role over the 35 sets she has appeared in this fall. Fisbeck, a La Grange native, has not played this season.

One of three liberos in Texas’ regular rotation, Rounsaville is averaging 1.5 digs per set (a number bested by only three of her teammates). Rounsaville, who missed Texas’ match against Wisconsin on Sunday, and Collins are two of the three Longhorns who have recorded seven service aces this year.

Texas (8-2) is ranked fifth in the American Volleyball Coaches Association’s volleyball poll. The Longhorns are coming off that five-set loss to Wisconsin.

UPDATE (5:20 p.m.): Texas has posted its starting line-up for the West Virginia match. Dalton replaced Collins in the starting line-up, while Claire Hahn, a freshman libero from Westlake, earned her first collegiate start.