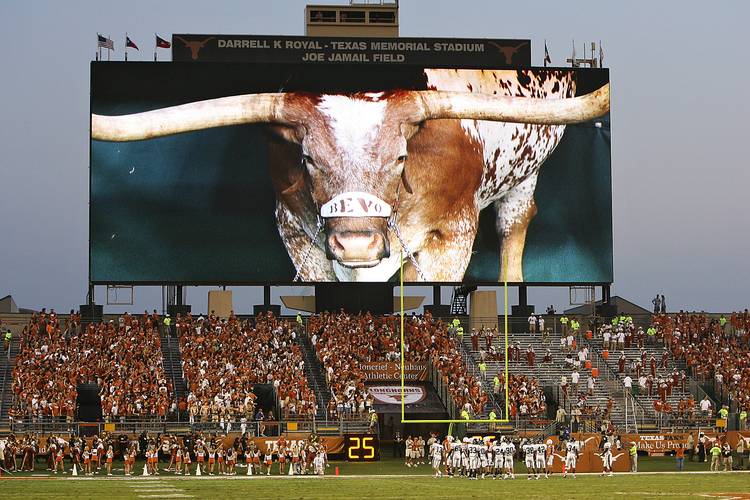 The University of Texas Longhorn fans were thrilled for their Horns as they defeated the Rice Owls 52-10 Saturday night. Bevo is seen on the scoreboard/ godzillatron at the Darrell K. Royal Texas Memorial Stadium. (Ralph Barrera/American-Statesman)

On the future DKR renovations:

Even Godzillatron has a shelf life.

The reality hit home last week with the revelation that Texas is planning to expand the south end zone of Royal-Memorial Stadium as part of a $140 million project that’s reportedly projected for completion by the summer of 2021.

The massive scoreboard cost the university $8 million when it was constructed in 2006. There will be another Godzillatron but the question is where? The guess here is it will likely be built somewhere where it won’t block the view of Tom Herman and his staff from their brand new offices, which will also be part of the project. According to the report, the long-range goal is to make DKR a massive bowl, presumably similar in scope to Michigan’s Big House, which holds over 107,000.

It’s just the latest example of the massive amount of revenue created by these major college programs and their willingness to spend those high revenue dollars as fast as they come in. Nothing wrong with that because it’s what’s needed to win major recruiting battles on a national level. Herman has already proven himself to be a capable recruiter and with athletic director Chris Del Conte following the DeLoss Dodds playbook to a tee — spend, spend, spend, then spend some more — the Horns will re-enter top-tier status when it comes to the area of athletic facilities.

After taking two of three games at Oklahoma, Texas baseball is in the middle of its nicest stretch in years and coach David Pierce has a real find in redshirt freshman designated hitter Zach Zubia, who just earned consecutive Big 12 newcomer of the week honors.

Zubia is swinging some heavy lumber with eight homers, including a Saturday blast to help spur a late Texas comeback in the series clincher in Norman.

Don’t look now, but the Horns are 11-4 just past the midway point of conference play. Texas has already equalled its league win total from last season and it took only 14 games to do it. The Horns didn’t win their 11th Big 12 game until the very last day of the 2017 regular season.

Texas is 4-1 in conference series, including a sweep of Kansas. Last season, the Horns started league play with three straight home losses to Texas Tech and never found any real momentum.

It’s a different groove in 2018. Augie would be proud.

For the rest of Cedric’s Nuggets, including his thoughts on the NBA playoffs, click here.

D’Onta Foreman: ‘Here’s why you should draft my brother’