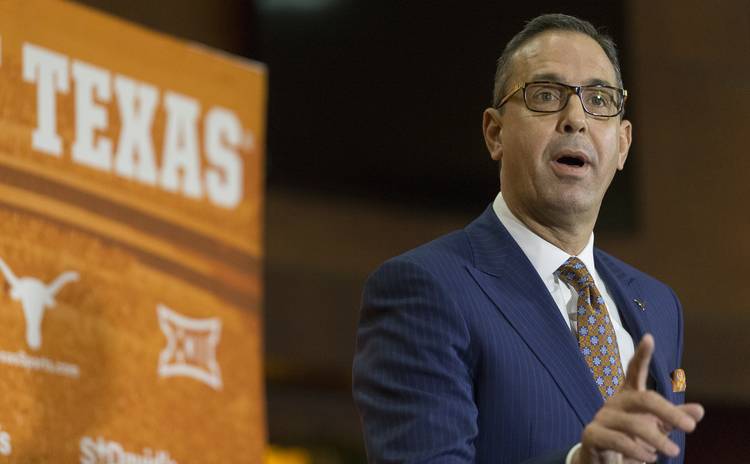 Texas athletic director Chris Del Conte and football coach Tom Herman joined forces to arrange a home-and-home series with Alabama, and there may be more where that comes from. Maybe even Texas A&M. “On the flight back from the Rio Grande Valley last night, Tom and I talked about scheduling more iconic brands home and home,” Del Conte told me Tuesday. “There are only about six or seven truly iconic brands.” (He named Alabama, Ohio State, Michigan, Notre Dame, USC, Florida and Penn State, but I’d add Clemson, Georgia, LSU, Florida State and Nebraska.) “We want to play an iconic team every year,” he said. “The fans want to see games like that. Those are the games Tom and I are committed to.” As for playing the Aggies, Del Conte said he had a conversation with A&M AD Scott Woodward a couple of months ago and told him, “As our schedules permit, we should consider scheduling a game.” Was Woodward interested? “I didn’t get that. We never got to that point.” Texas is booked through 2027 (home against Michigan), and Del Conte said, “You could do something after that season.”

Without question, baseball coach David Pierce ranks as UT’s coach of the year not named Eddie Reese, who belongs in a separate category. It should go without saying he’s the Big 12’s coach of the year. “The job David and his staff did this year is outstanding, especially considering the tough schedule they played early,” TCU coach Jim Schlossnagle told me. “To hold all of that together and then peak at the right time is a credit to their staff and upperclassmen players.” Pierce had to piecemeal a pitching staff ripped apart by last year’s major-league draft that took away 11 players. One of the absolute best things Pierce did was find and develop versatile players that have gone a long way toward clinching Texas’ first Big 12 championship in seven years. Pierce moved an infielder (Masen Hibbeler) to outfield where he’d never played before, moved first baseman (Ryan Reynolds) back to his former spot at third base, recruited a terrific catcher (D.J. Petrinsky), made a closer out of a second-time Longhorn and used a talented freshman outfielder (Kamron Fields) as one of his valuable relievers who threw shutout relief against TCU. He also mined every bit of potential out of a pitcher (Josh Sawyer) who has undergone three operations. That, my friends, is excellent coaching. He remarkably stuck with his relievers to the point where he has them set up perfectly with Sawyer and Parker Joe Robinston setting up McGuire. As first baseman Jake McKenzie said of Pierce after Texas swept TCU, “He’s pretty calm under pressure.”

So the first of the onslaught of preseason college football magazines is upon us, and Texas is ranked No. 20 by Athlon Sports. Oklahoma is the highest-ranked Big 12 team at 10th, and the Aggies are projected at No. 25.

For the rest of Kirk’s 9 Things, including his takes Tiger Woods, Texas Lutheran baseball and the Cleveland Browns on Hard Knocks, click here.

Bohls: Coleman spearheading a different Texas team and has a banner to prove it

Bohls: Coleman spearheading a different Texas team and has a banner to prove it