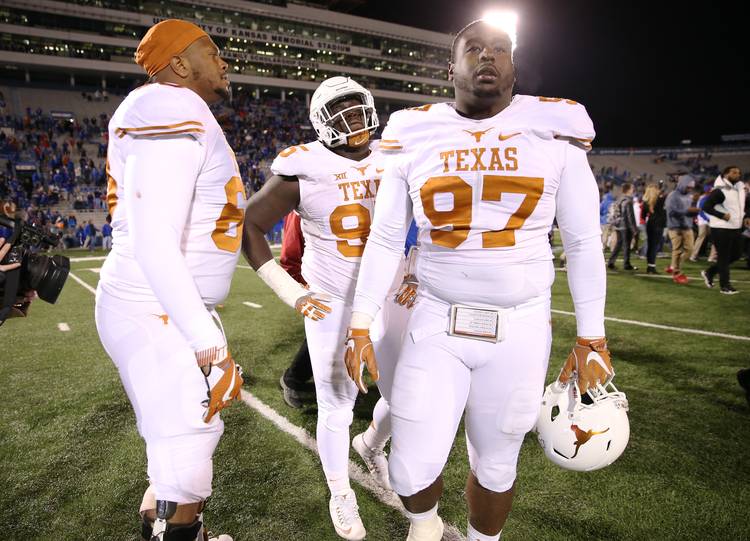 We’re breaking down Texas’ starting lineup. We’re doing two a day, one offensive and one defensive player, in alphabetical order on both sides.

Nelson was a three-star recruit who signed in 2014, the first cycle for Charlie Strong, who used his Florida recruiting connections to land Nelson late in the cycle to improve depth on the interior of Texas’ defensive line.

Nelson, who signed in the same class as former lineman Poona Ford, didn’t receive a UT offer until a month before signing day. He visited Texas a week before signing day and signed Feb. 5 as part of a late run of recruiting gets for Strong’s first class.

Nelson spent most of his prep career playing end. He finished his career with 220 tackles and 15 sacks. He was ranked the No. 57 overall defensive tackle in the nation and the overall No. 828 prospect in the cycle, per 247Sports’ composite.

Who Nelson has been here — so far

Nelson is a senior tasked with replacing Ford at nose tackle. The big man from Florida enters the year with 15 starts in 31 career games played. He took a redshirt in 2014 before becoming a piece of the two-deep along the defensive line as a redshirt freshman in 2015. He finished that year with seven tackles and one sack.

Nelson began making a real impact as a sophomore. He started eight games, recording 45 tackles, six of those behind the line of scrimmage. His first career start came in the 2016 season opener against Notre Dame, earning Big 12 defensive player of the week honors after making eight tackles including 1.5 tackles for loss. Nelson started seven games in 2017, missing two games due to injury.

When asked at Big 12 media days, Tom Herman insisted that it was unfair to compare Nelson with Ford. The players have different builds and skills. What the Longhorns need from Nelson, Herman said, is consistent play and leadership.

For his part, Nelson told reporters this summer that “Poon’s gone but I’m the next guy. I’m going to hold the fort down.” Nelson has experience in the middle of the line — he was UT’s starting nose tackle during that breakout performance against Notre Dame in 2016. If Nelson is healthy (an elbow injury limited him during spring practices) and can occasionally replicate those Notre Dame stats, the line will survive the loss of Ford.