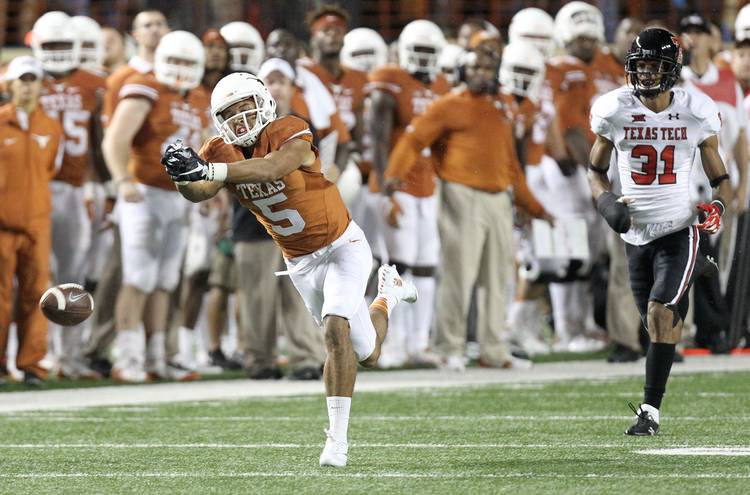 On a crazy night, it was a crazy play call that ultimately led to Texas’ 48-45 loss tonight to Texas Tech.

A big Daje Johnson kickoff return helped Texas cut it to 48-45 on a touchdown run by Chris Warren III with 2:06 to go, and the Longhorns nearly turned the miracle with an onside kick that was bobbled three times by various Red Raiders. Tech recovered, however, and ran out the clock.

Texas had to do three things to solve the nation’s No. 2 scoring offense — get a big night from freshman running back Chris Warren III, manning the rushing duties because of injuries to Johnathan Gray and D’Onta Foreman; control the clock to keep the ball out of Patrick Mahomes’ hands; and ride a strong defensive effort to prevent the scoreboard from getting out of hand.

Two of those three worked out. Warren looked like Texas’ star of the future, the defense held Tech scoreless in the first quarter and did a good job on the night. But Tech owned time of possession.

Warren, simply put, was amazing. He wrecked one of the nation’s worst defenses — Texas Tech ranks 121st in points allowed and 126th in total defense — by rushing for 276 yards and four touchdowns on 25 carries, all with Gray and Foreman watching from the sidelines. He broke Cedric Benson’s freshman rushing record for yards in a single game.

Warren had only 18 carries all season heading into Thursday night.

The loss officially ends Texas’ hopes for a bowl game.

That Texas was even in this game was a surprise, considering all of the injuries the Longhorns had to deal with. On offense, that was quarterback Jerrod Heard (concussion) and running back Kirk Johnson (leg) in the first half, along with the already-existing injuries to Gray (turf toe), Foreman (finger surgery) and right guard Patrick Vahe (knee). On defense, Texas lost linebacker Malik Jefferson (ankle), defensive tackles Poona Ford (head) and Desmond Jackson (flu), defensive end Shiro Davis (shaken up) and linebacker Peter Jinkens (knee).

Texas still leads the all-time series with the Raiders, 49-16, and have won now won six of the last seven. This was the first loss to Tech since the memorable 2008 Michael Crabtree game in Lubbock. The Longhorns are 30-6 vs. the Red Raiders in Austin.

Longhorns in the NBA: Through Nov. 25