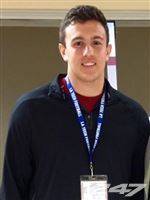 Peyton Aucoin is a 6-foot-5-inch tight end who was once threatened to be ejected from a game because he was being “too physical.”

Here are what people are saying about Peyton Aucoin:

The more I watch of Gilbert-Mattox' O, the more I see why it's important to sign Peyton Aucoin and Irv Smith (other). #HookEm

It may be wise to show Irv Smith and Peyton Aucoin this… #HookEm pic.twitter.com/J3ifawcWF6

I'm thinking Peyton Aucoin is going to end up as an OT. Kid is already massive as a 18 year old and a fantastic blocker.

@Gabe_TFB By the way, think that Peyton Aucoin has a lot of Geoff Swaim in him. That dude likes to mix it up.

I have no idea what else Peyton Aucoin can do, but he will demolish anyone wearing a different color from him, and that's a valuable thing.

In sum, Peyton Aucoin is a violent human being and Texas fans should want him in Austin. pic.twitter.com/1HFONoXYVv